Allegra Clark
[view]
“We are less than human now. We are no different from our swords themselves. Our hearts are cold, and we count the days we live solely by the flesh we cleave. What meaning can there be in such an existence?”
—Karla in a support conversation with Karel

Karla is a playable character in Fire Emblem: The Blazing Blade. She is the emotionally distant, naive and cool-natured sister of Karel, known as the Princess of Swords.

It is implied in her supports with Farina that she and Karel were either born or have lived in Sacae, though she mentioned that her ancestors sailed from across the seas. She and her brother were raised in a place with no contact with the other Sacaen tribes, a place where women are not allowed to touch swords and have to always listen to what men say. With the law of inheritance meant only one would learn the secret ways of the family, she lost everyone in her family except Karel, who then severed ties to his past. She then wandered the continent in search of her brother.

While searching for her brother’s whereabouts, she would drop by various arenas, winning in succession until she came to be feared as the “Sword Princess.” In the arena she was challenged by Bartre, who she took interest in and they eventually grew to be lovers.

She later marries him and becomes the mother of Fir, but dies of illness a few years before the Fire Emblem: The Binding Blade.

Although she has mastered the art of swordplay, she generally dislikes fighting and often finds peaceful methods of resolving conflict, fighting in arenas mainly in hopes of finding her brother. Still, due to not being influenced by the various other tribes, leading to an ignorant outlook of the world, and even after she finds out the truth about Karel, she strives to redeem him, or die trying.

In order to recruit her, three conditions have to be met: playing in Hector mode (whether Normal or Hard), having Bartre promoted to a level 5 Warrior before Chapter 31(x) starts, and including Bartre among the units taken into the stage itself. If all of this is fulfilled Karla appears as a neutral unit standing on top of the arena, and having Bartre talk to her will trigger a battle. Both Bartre and Karla must survive the fight in order for her to join your team.

Karla joins extremely late with lower stats than some of your other units and virtually no prospects at forming meaningful Support boosts. She possesses the Dark affinity, the rarest affinity in the game, and will thus almost never benefit from Tactician Stars in anything approximating optimal play. She is immediately surpassed by both Karel and Jaffar in virtually every area, her prospects for catching up to either are slim, and she will require loads of dedicated experience to train given her reasonably high starting level. Further complicating matters, her requirements for recruitment are obscure, and she will only be an option at all if the player chooses to raise Bartre. However, she has good accuracy, resistance, and avoid, despite having below average HP, Strength,and Defense. She CAN perform decently in the hard mode variant of Chapter 32x(H) , however, so long as the player is careful to avoid putting her in range of enemies wielding Swordslayers.

Despite her glaring flaws, Karla is competent enough to be combat-capable in the subsequent chapters. Her greatest weakness is her bleak outlook on strength, with very low growth and starting level, and almost no time for training.

Sword Vassal
A traveling swordswoman in search of her brother. Her impressive skills and good looks have enlivened many arenas. Appears in Fire Emblem: The Blazing Blade.

Karla is a powerful asset in the already loaded sword pool and is considered to be one of the best sword units in the game. While her stats are comparative to Ayra who helped establish the sword infantry archetype she is a part of, Karla has far exceeded most of her competitors due in part to her versatile statline that carries no real weakness in either offense or bulk since her high Spd and good HP covers her semi-low bulk while she has among the highest base Atk in the game.

Vassal’s Blade packs incredibly powerful effects. Not only does it carry a special cooldown acceleration effect, but if her Spd is greater than her opponent’s, she increases her damage output by 70% based on the different, reaching a maximum +7 damage. With the right set ups, Karla is a damage machine capable of destroying most units who stand in her way.

Draconic Aura takes boosts her Atk by 30% when it activates, leading to roughly a 15 Atk boost when it procs. Wrath is arguably what makes her and other Sword Infantry units so potent as it accelerates special cooldowns when she is under 75% health and when her special activates, she deals an additional 10 damage regardless. Finally Even Speed Wave grants a speed boost of 6 to herself and adjacent allies at the start of even numbered turns, granting her the self Spd buffs she needs to maximize her Vassal’s Blade as much as possible.

Karla’s range of counters is down to a very specific set of units, namely very specific sets of blue units. Units who can bypass her Spd using skills such as Reinhardt or Fallen Hardin are able to dispatch her. Bulky blues like Lukas or Ephraim can also withstand a few hits from her, even when she unleashes her special, and take full advantage of their color advantage. She is vulnerable to Panics and Ploy skills which can turn her boosts into severe disadvantages that hamper her performance.

Karla’s skill set is already solid enough that she needs minor inheritances that are easy to acquire, though she has a few premium options. Reposition is a standard support skill to move allies out of danger or place herself between an ally and the enemy. Moonbow is a better overall special just to ignore part of the enemy Def rather than trying to brute force through with Draconic Aura. Skill A can be Fury as the flat stat boosts simply makes her all around stronger and the recoil can put her into Wrath range faster. Some also consider Distant Counter as her bulk is enough to take hits from most mages and retaliate in tow.

Karla: Too inexperienced... I'll never reach my brother now...
(End of chapter)
Hector: Oswin! What happened to that female swordfighter? Karla, wasn't it?
Oswin: It seems she was hurt in that last skirmish. She left without telling a soul.
Hector: Is that so? Well, that's that then.

After the conflict, Karla became involved with a warrior that she met. She died of an illness several years later.

Karla is illustrated in the trading card game Fire Emblem Cipher with the following cards: 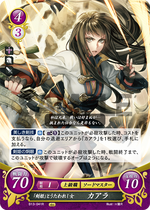 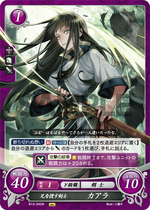 Karla is a female variant of the name Karl. 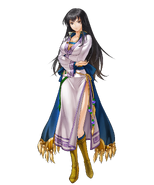 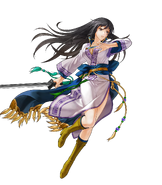 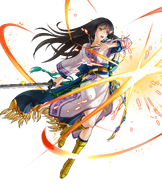 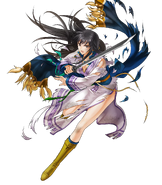 Karla as a Swordmaster in Fire Emblem 0 (Cipher).

Karla as a Myrmidon in Fire Emblem 0 (Cipher).

Karla's portrait in The Blazing Blade. 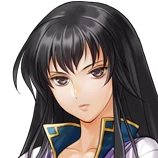 Karla as an NPC