“Then you should know that not all women care about jokes or witty banter. If you don't want to talk, then let me sit by your side in silence. I just want you to keep an open heart, Zeek...”
—Kate, in a conversation with Zeek

Kate (ケイト Keito, romanized as Kaite in the instruction manual) is a playable character from TearRing Saga: Utna Heroes Saga. She is a knight of Wellt who is assigned to be the bodyguard of Princess Sasha.

Kate is introduced alongside Sasha when they are fleeing from Duke Codha's soldiers at the beginning of the game. Both of them join Runan's army after he comes to their aid. Early in the game, she makes a promise to never leave Sasha's side. In her first conversation with Zeek, she is suspicious of him until he reveals that he was enslaved by the Zoa Empire and became a dark knight to protect his family.

Despite Zeek's attempts to keep his distance from Kate, she insists on staying by his side. Over time, the two of them fall in love. Believing that Zeek is misunderstood by everyone else in Runan's army, she ignores Norton's warnings that he is most likely to be a traitor. When Zeek defects back to the Zoa Empire, Kate immediately assumes that he has been captured and asks Runan to rescue him.

Regardless of which army that Kate is sent with after the third route split, she eventually reunites with Zeek. If she is in Holmes's army, she frees Zeek after his capture at the hands of her allies. Before Zeek can reveal the truth about himself, Nefka appears and informs Kate about it. He also tells Kate that she has been tricked by Zeek and kidnaps her.

When Runan and Holmes invade the Gerxel Church's temple near the end of the game, Kate can be re-recruited by Sasha if both of them were sent with the same army after the third route split. If she is recruited back to Runan's army, she will be present in the final battle against Zeek.

In the ending, Kate refuses to accompany Sasha back to Wellt Castle and instead decides to visit her father's grave. She also tells Sasha that her father would not forgive her for her actions and claims that she lacks the qualifications to continue on as a knight.

Kate aspires to live as a fine knight because of a promise that she made to her father before his death. She is initially confident in her fighting skills and ability to protect Sasha from harm. Unlike the rest of Runan's army, she is convinced to believe Zeek's claims. She becomes very upset whenever others suspect that Zeek is a traitor, as shown in her conversation with Norton. After Zeek leaves the army, she is always in low spirits and behaves strangely.

When Kate rejoins Runan and Holmes towards the end of the game, she feels deeply ashamed of herself for trusting Zeek and believes that her allies would not forgive her. However, she is reassured that everyone else in the army still likes her.

She appears as an NPC in Map 1. She will automatically join if Runan talks to Sasha. If she is kept alive, she will return in Map 3.

Kate is a decent unit, starting with good bases and average growth rates, but rather poor Movement that can cause her to be left behind by the other characters. She will be a useful fighter who doubles as both a sword-user and an archer, and her support with Sasha will prove to be useful, especially early in the game. She also receives good support bonuses from Zeek, but since he is not playable for very long, it is limited in usefulness. Regardless, it helps her offense and defenses in the early stages of the game, making her easier to train. Her promotion gives her a mount, which fixes her Movement problems, but also rather poor stat gains. Statistically, she is very similar to the other Lady Knight, Sharon, although Sharon has superior Agility. Nothing in particular makes her stand out, but she is among the better half of the playable mounted units.

If the player wants to keep all of the playable characters alive for the ending, it is noteworthy that it is helpful to train Kate, as she is auto-fielded in a chapter near the end of the game and thus will be placed in the middle of the battle. Although, Sierra and Renee have some tricks that can be used to ease the situation if Kate ends up being under-trained.

Kate is a feminine given name that originated as a diminutive of Katherine, which is derived from the Greek Αἰκατερίνα or Αἰκατερίνη, neither of which have a known meaning. 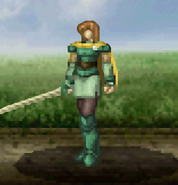 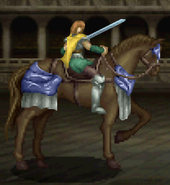