“I... I was scared... I started running blindly when the zombies came after me, and I found myself in the toxic marshes. The bad air got to me, and I could barely even breathe... Then, when I thought I was done for, I suddenly transformed into a huge dragon... And then I... I panicked, and I incinerated all of the zombies that were after me. That was just a dream... Right, Holmes? It was just a weird near-death experience... Please, Holmes... Just tell me it was all a dream!”
—Katri, recalling her first transformation into Neuron

Katri (カトリ Katori) is a major playable character from TearRing Saga: Utna Heroes Saga. She is the Shaman of Fire and therefore can use the Ring of Salia to transform herself into the holy Fire Dragon, Neuron (ネウロン). She is being pursued by Gwenchaos and his followers because she is one of the four shamans required as sacrifices to resurrect the dark dragon, Gerxel.

Like Enteh, Katri must be deployed in every chapter in which she is available. If she is defeated, this will result in a Game Over.

Katri's true identity is Princess Maria (マリア) of Salia, the fifteen-year-old daughter of King Dagnell and Queen Maria. As an infant, she was smuggled out of Salia by Zacharia, who had been ordered by Ahab to kill her in the forest. Instead of following Ahab's orders, Zacharia entrusted her to the care of Father Law, who gave her the name "Katri". Years later, Katri began training as a cleric in the Kingdom of Marl.

Early in the game, Katri and Law begin traveling to the Temple of Mars, where he intends to leave her in the care of Eisenbaha. However, their ship is attacked by the Isla Pirates led by Maerhen, which results in them being separated. While Law is slain, Katri is imprisoned within one of Maerhen's ships. In her introduction scene, she is rescued by Holmes and the Sea Lion, whom she initially believes to be kidnappers like Maerhen's men. Once Xeno treats her with great kindness, she reveals the Ring of Salia to him, thinking that it is simply a memento from her parents.

On Holmes's boat, Katri finds the Zombie Staff and uses it, mistakenly thinking that it is the legendary staff of Morse that can be used to resurrect Law. After summoning hundreds of monsters, she flees from the Sea Lion Pirates due to Holmes's harsh behavior towards her. She soon becomes lost in the poisonous marshes of Isla and suddenly transforms into Neuron amid the monsters. Once she returns to her human form, she is found by Runan, Xeno, and Yuni, who return her to Holmes. During her reunion with Holmes, she learns that she can transform into a dragon because she has Utna's blood in her veins. After he makes a promise to protect her, she joins his crew and accompanies him as a healer for the next segment of the story.

During the liberation of Salia from Ahab, Katri saves Zacharia's life after he is defeated by Holmes on the battlefield. Once Zacharia sees her holy markings, he realizes that she is Princess Maria and reveals this to her and Holmes. After Ahab's death at the hands of Holmes, Katri reunites with her parents, who are overjoyed to see her again. Later, she decides to leave Holmes's group in order to stay with her parents. Before she and Holmes part ways, she gives the Ring of Salia to him, believing that it will cause them to meet again.

Later in the game, Katri surrenders herself to Gwenchaos when he holds her mother as a hostage. Despite Holmes's best efforts to rescue her, she is ultimately sacrificed to Gerxel alongside Neyfa and Enteh. After Gerxel is slain by a combined attack from Runan, Holmes, Sennet, and Tia, Katri is revived by Miradona alongside the other fallen shamans and Richard. During her reunion with Holmes, she points out that he is crying, which he denies by claiming that he is sweating. She also holds onto him while she is frightened, which causes him to become embarrassed because he thinks that the other characters are watching.

In the ending, Katri initially returns to Salia and reunites with her parents. Eventually, she boards the Sea Lion to travel around the world alongside Holmes, Runan, Enteh, and Shigen. Unlike Enteh, who embraces her birth name of Maeve, Katri continues going by her given name at Holmes's insistence.

Katri is a selfless, kindhearted, and naive girl who is warm and friendly towards almost everyone she meets. She rarely thinks ill of others and even heals several of the enemy commanders whom Holmes defeats in battle. Xeno states that her words are like "a soft melody that cleanses the hearts of those who listen."

Katri has always dreamed of meeting her birth parents and initially believes herself to be an orphan. She does not like to be in her dragon form because it frightens her and considers discarding the Ring of Salia until Enteh warns her about the dangers of it falling into the wrong hands. She is also unaware of Holmes's romantic feelings for her and expresses surprise whenever he gives a compliment or shows concern for her.

Katri joins early in the game and has good stats for a healer. Her Magic, Weapon Level, and Agility are all quite good, which makes her effective at healing. However, her Defense is extremely low and she often needs to be protected, as her death will result in a Game Over. She is required to be used in all of the chapters that she is available, making her Holmes's equivalent of Enteh in Runan's chapters. She is the only staff-user who can use summon staves for a long time, which gives her additional utility, as she can create distractions for the enemy. She can also transform into a dragon and launch attacks at groups of enemies at a time, giving her additional uses. While in dragon form, she is basically invincible, although she does not gain experience points and will return to her human form after an unspecified number of turns.

“Noble Utna, please forgive me... I am... Aah...”
—Katri's quote before transforming

According to Shouzou Kaga, the name Katri was borrowed from the character Ukonniemen Katri from the anime Katri, Girl of the Meadows, which is based on the Finnish novel Paimen, Piika ja Emäntä ("Shepherd, Maid, and Matron").

The name of the guardian dragon Neuron comes from the Ancient Greek word νεῦρον (neûron), meaning "nerve" or "sinew." Like the other guardian dragons' names, its meaning is related to the nervous system. 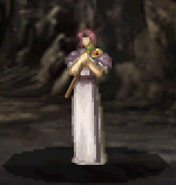 Katri's battle model as a Sister.