Sage
[view]
“Come to me, dregs of Crimea! I will teach what it means to oppose the might of Daein.”
—Kayachey

Kayachey is a boss character in Fire Emblem: Path of Radiance. He is a Daein officer under Petrine that commands the Daein border fortress Tor Garen. When Ike, now the general of the Crimea army, attempts to cross into Daein, Kayachey is ordered to stop him. Kayachey drops a Tornado tome, the highest-level obtainable Wind tome in the game. (Rexcalibur can only be obtained by hacking) He also is heavily disliked by Shinon, who was working under him as a fresh recruit into the Daein army. After difficulties, Kayachey is slain in action.

Default
Kayachey: And now you will realize the true power of Daein!

Vs. Ike
Kayachey: You fools... It must be good fortune that has brought you this far... But you'll need more than luck to get over this wall.

Vs. Beast Laguz
Kayachey: You vexsome beast! Our country has a long history of conflict with your homeland of Gallia. The moment when we put an end to you once and for all rapidly draws near. 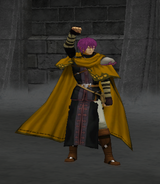