Leader of the Wolfskin Tribe

[view]
“*sigh* I've made a real mess for myself. I came down the mountain to gather bugs for my collection, but now I'm lost... Hm? What's going on over there? I thought I heard a ruckus, but wow, that's a lot of people. Hmm... HMM... Ah! That guy/lady looks nice. I'll ask him/her for directions back up the mountain. I may have a horrible sense of direction, but I'm a great judge of character!”
—Keaton in Conquest Chapter 14

Keaton is a playable character in Fire Emblem Fates and an ally on the Conquest and Revelation Routes.

Keaton is a Wolfskin, beings capable of turning into werewolf-like creatures. Living in Nohr, he is the leader of his pack. If he achieves an S-Support with another unit, he will have a daughter named Velouria.

Keaton is seen in Chapter 15 when the Hoshidan army is forced into Mount Garou by the Nohrian Army. Sensing intruders on his people's lands, Keaton confronts the Hoshidan army and asks if they are there to kill his people for their pelts. Corrin corrects him, stating that they merely wish to pass through peacefully and lays their weapons down as a sign of their intentions. Keaton trusts Corrin and willingly allows them to pass through. However, a magical land mine planted by Iago suddenly detonates, killing one of the Wolfskins accompanying him. Believing that Corrin had lied to him, Keaton summons his pack to eliminate the intruders. In the end, Keaton and his pack are killed in self-defense, and Corrin leaves, remorseful for the unnecessary violence that occurred.

Keaton first appears in Chapter 14 when he gets lost after climbing down his mountain to add more things to his collection and ends up in Cyrkensia. He hears a scuffle in the area, and bears witness to a battle about to unfold between the Nohrian army and a small group of Hoshidan assassins sent to kill King Garon. He sees Corrin among the group and comments on how he could ask them for directions back to Mount Garou. When talking to him, Corrin expresses their surprise at seeing his tail, to which Keaton responds rather dejectedly. He introduces himself to Corrin and agrees to join their group after they apologize for being unfamiliar to the area.

Keaton shows up during the introduction to Chapter 13 with Kaden, both being badly injured. He tells them that he was with Kaden in Cyrkensia when buildings started to suddenly collapse and that they tried to help keep them stable but were attacked by invisible forces when they tried to. Camilla has Sakura heal the two of them, they are then questioned on how they their injuries were sustained. They reply that the town was destroyed by an unseen force and their injuries were a result of an attempt to stop it. Keaton and Kaden decide to join Corrin's army and help protect the town and end the war.

In Paralogue 18, Keaton, accompanied by Kaze, goes to look for the portal to the Deeprealms to visit his daughter, Velouria. He tells Kaze that his daughter is pretty much like him, being a Wolfskin, except that she prefers her own company and she really wears her heart on her sleeve. Suddenly, invisible invaders ambush them, and Keaton fights against the invaders, although he hates to keep Velouria waiting. Out of nowhere, Velouria, picking up her father's scent, departs her Deeprealm and finds Keaton in the middle of the battle, and Keaton, surprised to see her, tells her they're in trouble and she joins in the battle.

After the battle, Velouria believes that Keaton set up the battle as a "game". Keaton attempts to downplay his happiness in seeing his daughter, but Velouria picks it up thanks to his tail wagging. Keaton attempts to send her back to her Deeprealm, but Velouria refuses, wanting to join Keaton's "pack". Though Keaton continues to refuse, she presents a shiny acorn that she found. Keaton is impressed by the present and gives her a gift that he found himself; a bat carcass. Velouria is equally happy for her gift and her happiness is enough to convince Keaton to let her join the army.

Cheerful, albeit a bit dense about human social standards, he does his best to impress others or make them happy, even at the cost of his own happiness or potentially his life. As shown in his supports, he's interested in things others would normally find to be garbage, gross, scary, or creepy - ranging from a dirty old doll to arachnids to human remains and beyond. He has a habit of saying the opposite of how he truly feels when praised or given a gift. However, despite his best efforts to hide it, his tail tends to wag energetically when happy. Though he acts tough, Keaton is actually pretty sensitive and tears up in a couple of his supports, most notably when Hana hurts his feelings. His sense of direction is relatively poor, getting lost with ease and requiring the assistance of others to lead him back, though he's reluctant to admit it.

His conversations with others also show that he prefers a messy, dirty habitat. During a support conversation with Kaden, he states that he prefers a "rugged" tail. His supports with Camilla also imply that he takes very irregular baths. He mentions that his hometown is littered with the remains of humans that came to take his clan's fur, to the point where it is impossible to walk three steps in without stepping on them. When invited to the player's room at their castle, he sprinkles dust around their room because it is too "clean".

However, despite his goofy personality, Keaton has a shockingly cruel side, as shown in Chapter 15 where he reveals that he eats humans that have tried to take his clan's fur. He even throws a human bone to Ryoma to prove his point. Also, in his A-support with Peri, he admits that he likes killing humans, and loves seeing blood flow from their dying bodies. Despite this, he is friendly towards humans as a whole, wanting to befriend Corrin's army, and limits his cruelty towards his enemies. However, when angered, Keaton is completely unreasonable, and will attack with murderous fury.

He is the most attracted to objects out of everyone in the army.

◾ Note: Growth Rates as a Wolfskin/Wolfssegner

Keaton is the Nohrian shapeshifter counterpart to Kaden. Instead of a focus on agility and skill like the former, Keaton focuses more on brute strength and tankiness, as his great HP and Strength stats ensures that he hits hard and can withstand a few blows, especially physical ones thanks to a decent Defense growth. He also has decent Speed growths, meaning that he can double on some enemies.

Keaton's personal skill, Collector, reflects his scavenging personality and allows him to harvest 3 ores or food supplies for the first seven turns. While it has little application combat wise or for support, he is a great unit to carry along during maps, even when grinding levels for other units on external chapter battles, to collect resources to either cook stat boosting food in the Mess Hall or collecting Ores for the Forge.

Keaton's base class is the Wolfskin class. He will already come with both of its classes skills; Beastbane allows him to rip through horse-mounted units and against the Kitsune in Chapter 19 of Conquest. However, Keaton will have to stay as a Wolfskin or Wolfssegner in order to use Beastbane. Odd Shaped gives Keaton a temporary boost in his damage when he attacks an opponent in odd numbered turns.

The promotion for the Wolfskin is the Wolfssegner class. From this class, Keaton can learn Grisly Wound to deal damage back at any foe that attacks but does not kill him and vice versa, which can be used to set up kills for other units. He can also learn Better Odds to heal 40% of his health during odd numbered turns, which can stack with Amaterasu from a nearby ally and Renewal to heal up to 90% of his health during odd turns, essentially making him an invincible unit to those that cannot kill him in one turn. While Odd Shaped can be used outside of the Wolfskin class set, Beastbane cannot.

The player will also need to be wary with anti-beast units with Keaton. Regardless of the class he is currently in, any unit with Beastbane (only applying to stone users), Beast Killer, Hunter's Bow or Hunter's Knife will be able to deal bonus damage to him.

Keaton's secondary class is the Fighter set. From the Fighter class, Keaton can learn HP +5 for some additional early durability and Gamble to increase his critical hit rates at the cost of his accuracy, which will be dampened even further due to his low skill growths.

The Fighter's class promotions are the Berserker and Hero classes. From the Berserker class, Keaton can learn Rally Strength, although this is rather limited since it is his only rally skill and his high strength means he is better off as a frontline unit. He can later learn Axefaire to boost his damage with axes, but it will only be effective in an axe using class.

From the Hero class, Keaton can learn Sol (which will be his only offensive skill without Friendship/Partner Seals) to recover a lot of health if he hits; however, given his low skill, he will have difficulty activating and landing a direct hit and will need help with skill boosts to ensure he will activate and hit often. Axebreaker makes him an effective unit against axemen.

The player should note that Keaton will have to start with E Rank weapons, so it is recommended to start off as a Berserker so he can get some axe levels to use for other axe using classes if keeping him there. His nice Strength growths should be helpful, too.

Lupine Collector
Leader of the wolfskin who set up their stronghold on Mount Garou. Sociable but isn't always honest with himself or others. Appears in Fire Emblem Fates.

Resolved Wolfskin
Proud leader of the wolfskin tribe. Celebrating the New Year in garb that is completely new to him. Appears in Fire Emblem Fates.

Keaton is illustrated in the trading card game with the following cards: 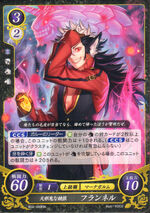 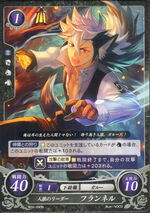 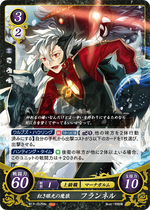 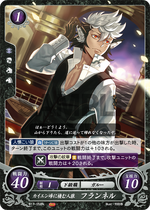 "Flannel" is a type of soft woven fabric.

"Keaton" is a type of fabric design. It also sounds a lot like "cotton", which fits the fabric naming scheme.