Orion Acaba
[view]
“Well, I just... I'm glad you finally saw me! Just try to keep an eye out from now on?”
—Kellam's recruitment quote in Awakening.

Kellam is a playable character from Fire Emblem Awakening.

Kellam's supports reveal that he grew up with five brothers, but his family was very poor, and he never had many commodities that other children had growing up. In a support with Nowi, he mentions that his lack of presence first began when he was younger and still living with his family; since they were poor, they had to share a lot, but he was mean and did not like sharing. Eventually his family got tired of him being so selfish and began ignoring him. This would later have a profound impact in his future, as most of the people he talks to are usually shocked (excluding a few, such as Cherche and Miriel).

One of his brothers, however, still acknowledges Kellam's presence and they exchange letters according to his supports with Tharja. Due to the war, his brother was evacuated from their home village and his wife is expecting a child. It's one of the driving force for Kellam's efforts in the Shepherds, so that his brother's new family can live a peaceful life.

Kellam is shortly introduced in the Shepherd's garrison where he briefly introduces himself to Robin, but quickly fades into the background, ignored. Even though he goes unnoticed by everyone, he still volunteers to be a part of the expedition to get aid from Ferox for Ylisse.

Kellam follows Chrom and the Shepherds up to the Ferox where he goes unnoticed the entire trip, even to the point of waving his arms in the air to get the attention of Chrom with no success. At The Longfort, Kellam deploys himself onto the battlefield; however, because of his lack of presence, neither the Feroxi or the Shepherds notice him at first. Kellam scares Chrom when he "appears", and joins the battle in hopes that he will get noticed.

After the war, Kellam departs from Ylisse for a long journey, but it would take Chrom and the others several years to notice his disappearance. If he marries anyone except Robin, his ending will state that his name was "lost to history".

Kellam is a frontline fighter of Chrom's Shepherds and is one of the biggest and tallest units in the army. Despite this, he virtually goes unnoticed. Most of the army considers him a "ghost", as his supports with Robin show that the other members wonder why there is always an extra cup or seat lying around when everyone is supposedly accounted for.

His lack of presence causes most people to jump in surprise when he suddenly "appears" out of nowhere. He is somewhat irked about this, but he is used to it. The roster states that he is actually quite proud of this. Still, he searches for a way to make others notice him. Interestingly, only those with animal-like senses, like Nowi and Panne, are able to find him rather easily.

In his supports with Donnel, it is shown that Kellam has experience in farming, as he gives him advice to help the crops Donnel planted thrive.

Kellam also thinks of himself as an "average" person, as his supports with Stahl and Donnel shows that even though they call him intelligent, he doesn't think much about it due to being alone and having tons of spare time to think about issues.

He wears a blank face, rarely speaks and is the tallest person in the army, even when seated.

Although the characters of the game tend not to notice him, it's (ironically) worth taking notice of Kellam's formidable growths. He is a consummate Armored Knight, sporting a 100% growth rate in HP and a 70% growth rate in defense, easily creating a wonderful wall against physical attackers. This makes him an excellent unit to pair up with relatively fragile units, like Lissa or Maribelle. His lack of skill and speed can be compensated for with a good support. However, his movement is a bit low, making him dependent on pair-ups for mobility. He is also weak towards magic users, making him an easy target for them without a support bonus in resistance. Despite these flaws, Kellam can be an invaluable unit once he starts leveling up.

Among the first generation, Kellam is the only unit that can promote to a General without reclassing. He will have impressive HP, strength, and defense, though his luck and speed may be a bit lacking. Pavise will make him even harder to take down physically and even occasionally nullify damage from Armorslayers and Hammers. As a Great Knight, Kellam will see slight drops in his strength and defense while balancing out his other stats and granting him some much-appreciated mobility. Kellam is near point for point with Frederick in this class for their caps. Luna, given Kellam's good Skill stat, is a worthy attack skill for him to use. Dual Guard+ is also a great skill for Kellam to have when in Pair Ups given his high Defense, making him a good defensive unit for those who need the protection. General winds up being Kellam's strongest offensive class, and his inherently low movement can be repaired with skills like Movement +1 and Acrobat from the Thief class line.

Kellam's two reclassing options are the Thief and Priest classes. Kellam can make a useful thief due to his high defense growth of 60%, which is useful for making him harder to kill while looting chests. The thief class also affords him a much needed boost of speed. Assassin Kellam has excellent mobility and can learn Lethality to kill non-boss characters, as well as Pass, for some extra mobility in certain cases. As a Trickster, Kellam can learn Lucky Seven, making him even harder to kill, while Acrobat gives a boost to his mobility that is useful for nearly all of his class choices. Also, Trickster boosts Kellam's resistance growth, allowing him to gain several points in resistance, making him sturdier against magic attacks. Interestingly, Kellam is unique among the parent generation characters for his simultaneous access to the Cleric and Thief family trees; while they do little for his offensive prowess, they do allow Kellam to fill a very useful utility role as a Trickster or Sage. This way, he plays a full-on support role by focusing entirely on healing allies and opening chests with Locktouch and Healtouch, while his Thief-tree mobility boosting skills let him run around the map that much faster. If Kellam winds up unpaired with anyone, this can be a useful alternative to his offensive capabilities as a General, so he can loot chests on maps like Infinite Regalia.

As a Priest, Kellam has high defenses, though with his low Magic growths, his healing will lack potency, even if Healtouch were factored in. However, Miracle can be a potential lifesaver should Kellam be attacked by mages. Offensively speaking, Sage is a class that Kellam should avoid since there are much stronger candidates for the role of magical attacker; however, using Kellam as a Sage in the aforementioned Locktouch/Healtouch support build is actually recommended, as the Sage's Tomefaire skill boosts Kellam's healing capabilities significantly for this role. Luckily his other priest promotion, War Monk, is a bit more useful for him since he can still utilize his solid strength in this class, as well that this class has a decent Resistance growth, similar to Trickster's. Renewal also makes a great skill for him in any class, especially tanking as a General with Pavise.

Kellam - Oft Forgotten
After the battle was over, Kellam departed Ylisse for a long journey. Of course, it took Chrom and the others several years to notice his absence.

Kellam and Robin
Many wrote of Robin's legendary exploits, but accounts of her origins and character varied. Scholars, poets, and bards agreed on one thing alone—she loved her husband, Kellam, above all else.

Kellam and Cherche
Cherche and her beloved Minerva returned to Rosanne and struggled to reclaim the country Virion had managed to lose. Her husband's name has been lost to history.

Kellam and Cordelia
Not even peace could dull the lovely Cordelia's knightly edge, as she became a figurehead for all Ylissean warriors. Her husband's name has been lost to history.

Kellam and Lissa
Lissa's wild nature led her to travel the world and relay its wisdoms to her brother. These exploits live on in droll tales told by the campfire. Her husband's name has been lost to history.

Kellam and Maribelle
After returning home to Themis, Maribelle became a magistrate who demanded equal justice for nobles and plebeians alike. Her husband's name has been lost to history.

Kellam and Miriel
Miriel remained in Ylisse but would vanish for days at a time to pursue her studies. In her final years, this research led to a historic invention. Her husband's name has been lost to history.

Kellam and Nowi
Nowi tried living away from humankind but soon longed for their company and set off to find her old comrades around the world. Her husband's name has been lost to history.

Kellam and Olivia
Though she never overcame her stage fright, Olivia danced across the land, mending the scars of war. Her husband's name has been lost to history.

Kellam and Panne
Once the fighting was done, Panne vanished. Some say she returned to her warren alone; others claim she found fellow taguel survivors. Her husband's name has been lost to history.

Kellam and Sully
Sully continued her knightly duties and led vital missions, soon becoming a role model for women everywhere. Her husband's name has been lost to history.

Kellam and Tharja
Even after her return to Plegia, Tharja kept an unhealthy obsession with Robin that led her to vanish for weeks or months at a time. Her husband's name has been lost to history.

Kellam is illustrated in the trading card game with the following cards: 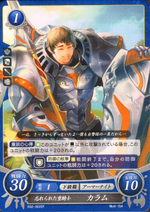 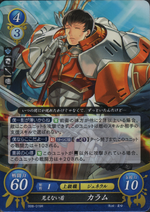 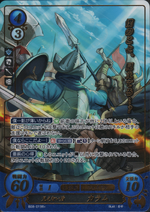 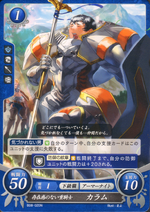 Kellam's name likely comes from the Scottish name "Callum", which means "dove" or "peace". This origin certainly nods to his personality and quiet nature.