Cavalier
[view]
“Our territory may be small, but our knights are among the bravest!”
—Kent to Heath in a support conversation

Kent is a playable character in Fire Emblem: The Blazing Blade. He is a knight of Caelin, one of the cantons of the Lycian League in Fire Emblem. He and his friend Sain were sent by the marquess to find his granddaughter for him on the plains of Sacae.

Trained as a knight of Caelin along with his friend Sain by General Eagler, the knight-commander of Caelin, the pair are deployed to Sacae on a mission from the Marquess of Caelin, Lord Hausen, to locate and bring back his granddaughter, Lyndis. While looking for information in Bulgar, the largest city in Sacae, the two knights have a chance meeting with Lyndis and the player. They escort her back to Caelin and help her defeat her granduncle Lundgren, who had been poisoning her grandfather in an attempt to seize the throne of Caelin. In the aftermath of the attempted usurping, Kent is promoted to knight-commander of Caelin.

Kent is present during the siege of Caelin by Laus' forces. One of the few retainers who flee Castle Caelin with Lyn to plan an assault, Kent eventually joins up with Eliwood and Hector's army and succeeds in reclaiming the castle.

Following the successful retaking of Castle Caelin, Kent joins Lyn in her decision to accompany Eliwood and Hector on their journey. At the end of this journey, Kent stepped up to the role of steward to Ostia when Caelin's rule is ceded to it. Depending on his supports, Kent can be wed to Lyn, Fiora or Farina.

Kent is a stern, uptight knight who always follows the rules. Harbouring a strict no-nonsense attitude, he is known to keep Sain's flirtatious tendencies in check, forcing the latter to regain focus of the missions and tasks they are to perform at hand. He is also staunchly loyal to his country, dedicated to safeguarding both its sovereignty and its peace.

Despite Kent's dedication as a knight, he is ultimately human, with a support conversation shared with Sain revealing that he has a crush on Lyn. If the player so chooses to raise his support rank with Lyn, the pair will wed at the end of the game.

Description: A knight in service to house Caelin. Virtuous to a fault.

Kent's selling points are his high Skill and Speed, which allow him to have an easier time doubling opponents. He also has higher defensive stats than Sain, with 5% more HP, Defense, and Resistance growths, even though his defense base is lower. However, his Luck stat is rather low, and his Strength growth rate is rather inconsistent, which can give him issues with enemies wielding Killer weapons, as well as issues finishing off opponents. However, Kent possesses an Anima affinity, and can support either Sain or Fiora, two units with similar movement that can increase Kent's Strength and Critical Evade.

Compared to Kent's counterpart, Sain, Kent possesses higher Skill and Speed, whereas Sain has higher Luck and a significantly higher growth rate in Strength. Although speed is not much needed in FE7 due to enemies' low AS, it is reccomended you use both since a cavalier has high movement and good rescuing capabilities.

“[Tactician], let me take the point. I will break through, even though it may cost my life. If something happens to me, [Tactician]... Lady Lyndis... Please watch over her.”
—Kent

“I will gladly volunteer to protect Lycia with my life.”
—Kent

For his bravery in fulfilling his command, Kent is named Knight Commander of Caelin. It is a high honor for one so young, but no one denies his worth.

After Caelin was placed under Ostian rule, Kent became its steward. His dedication earned him the love of his people.

When her grandfather died, Lyn asked that Caelin be taken under Ostian protection. She set out for Sacae with her former vassal and new love, Kent. The people of Caelin gave them their blessings.

Although they returned to their respective countries, they visited one another often and their relationship bloomed. When Lyn abdicated Caelin’s rule to Ostia, Kent resigned, moved to Ilia, and married Fiora.

Farina stayed in Caelin as a mercenary, hoping to stay close to Kent. When Lyn abdicated Caelin's rule to Ostia, Kent resigned his commission and served at Farina's side as a mercenary in Ilia.

Kent is illustrated in the trading card game with the following cards: 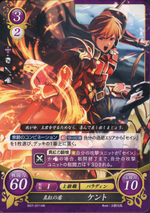 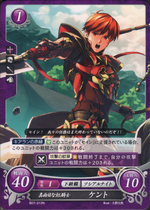 Kent is probably named after the character Kent in Shakespeare's 'King Lear,' the only one of Lear's knights to remain loyal to him.

Kent as a Paladin in Fire Emblem 0 (Cipher).

Kent as a Cavalier in Fire Emblem 0 (Cipher). 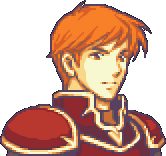 Kent as a Cavalier