“You only have to hold out until I get away. After that, do whatever you want. Just know that if you don't keep them occupied long enough, I'll see to it that you are punished for your cowardice. You wouldn't want your dear old parents to suffer in the work camps, would you? If you care about them, you'll fight like a man!”
—Kernel, in a conversation with Melisal

Kernel (カーネル Kāneru, fan translated as Carnel) is an enemy character from TearRing Saga: Utna Heroes Saga. He is a noble from Canaan and one of the three bosses of Map 17. He is posted at Selba, which he considers to be a dull backwater place, and envies Pavlov for having control of Sene. He commands bandits to attack the areas around his post in order to steal from the villagers and capture women and children, whom he hands over to the Gerxel Church.

Due to the risks of having Rennie in his custody, Kernel hands her over to Pavlov, who tortures her for information regarding the location of Lionheart's base. When Lionheart's army approaches Selba Castle, Kernel attempts to escape with his stolen treasures, including the ☆Tome of Salia. However, he is killed by Runan's army before he can reach his destination, Balt Fortress. 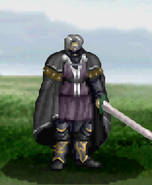