Khadein would eventually become part of Regna Ferox, along with Aurelis. 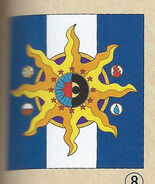 A Mage of the Khadein military as depicted in the TCG.
Add a photo to this gallery