Captain of the Crimea's 5th Platoon

[view]
“I will brook no insult to my queen or my armor! You face Kieran, second commander of the Royal Knights...and your doom!”
—Kieran, fighting Valtome for honor

Kieran is a playable character from Fire Emblem: Path of Radiance and Fire Emblem: Radiant Dawn. He is the deputy commander of the Crimean Royal Knights, and serves under General Geoffrey.

Serving as a member of Crimea's 5th Platoon, who, alongside Geoffrey, was entrusted with the honorable duty of escorting Elincia, Crimea's secret princess, from the Daein attack on Melior during the Mad King's War. When the escort is later ambushed by Daein forces, he is captured by the Daein army and held in Castle Canteus. Kieran is later rescued by Ike's forces, whereupon he will remain with them until the game reaches its conclusion. He will then cede his services back to Crimea, serving under the newly-crowned Queen Elincia.

Three years later, in recognition of his deeds in the previous war, Kieran was able to rise all the way up to sub-commander of the Royal Guard. Receiving personal orders from Geoffrey to fight in order to prevent Duke Ludveck of Felirae’s coup d’état. Around that time, he also granted him a silver axe as a gift, making him elated to the point of forgetting his place.

Alongside the other Crimean Royal Knights, Kieran will then lay siege to Castle Felirae, essentially falling into Ludveck's trap. The Royal Knights will then rush to Fort Alpea in the next preceding chapter, serving as reinforcements to Elincia's stranded forces.

Kieran shares a bitter, yet one-sided, rivalry with Oscar, whom he resents for leaving the Crimean Knights. According to a support conversation he shares with Oscar, his rivalry with Oscar started in their second year of enlistment in the Crimean Army when they had just completed their horsemanship training. According to Kieran, during a final horse race, Oscar beat him "by the smallest of margins," while Oscar recalls the distance to be "at least three lengths." In the end, he and Oscar realize they want to save innocent civilians. Though they belong to different groups, they agree that they have the exact same motivations.

Kieran has a somewhat rocky start due to fairly middling bases and the high weight of axes, but he's well worth the investment to make good. Mounted units dominate in FE9, due to high movement, the ability to rescue most units, and to move again after attacking. His strength growth is solid, and his speed growth is acceptable as well, meaning that he'll reliably gain attack speed with most levels. You can equip him with the Knight Ward to both increase his bulk and give him an extra 30% in his speed growth. Giving him the energy drop and/or speedwing from chapter 13 is also a good idea, as they help patch up these initial issues. It could even be argued that Kieran is so good, it's worth saving the chapter 2 speedwing for him to use. However, most players will understandably prefer to use that on Boyd or Oscar. Once Kieran gets up to speed, he will join Titania as one of the poster children for why axes are the best weapon type in Tellius. With hand axes being such potent 1-2 range weapons, with the potential to be forged later on for even more power, he will quickly begin to achieve one of the highest kill counts in Ike's army. He's also an ideal candidate for an Occult scroll, since he sees a lot of combat and deals heavy damage, as Sol will allow him to heal himself with relative frequency.

His weapon choice upon promotion matters little, as he already has the best weapon type in the game. Bows give him more ranged options, but considering he starts at E rank, hand axes will usually be better. Lances helps to cover up his weakness to swords, but Kieran is able to reliably fight against the weapon triangle, especially later on. Ultimately, it's down to player preference.

Kieran joins with Geoffrey, Makalov, Astrid, and Danved in Chapter 2-3. He, along with Geoffrey, is a high-level second-tier Paladin, and comes with well distributed Base Stats. His HP is the higher than even Geoffrey, who's HP is not very high but it's still notable. His Strength is high enough that he won't have to worry about being weighed down, even by the Steel Poleax, the heaviest weapon in the game, therefore his solid base Speed, will not be lowered in battle. His base Skill and Defense are also good. His Resistance is quite low, however. If planning to bench the Crimean Royal Knights later, Geoffrey and Kieran will basically power through 2-3 and parts of 2-E, with maybe some supports from the others. Growth-wise, he has fantastic HP, Strength, and Defense, and his Skill is decent. His Speed, Resistance, and Luck are rather low.

After Part 2, he will quite easily fall behind Titania and Oscar by the time Chapter 3-9 rolls around. He can still be trained to become a Gold Knight quite easily if fed enough during 3-9, 3-11, and 3-E, or if Bonus Experience is used as he will cap his HP, Strength, and Defense quite easily allowing for efficient BEXP use.

Among all the potential Gold Knights and Silver Knights, Kieran has the highest Strength cap, at 36, and the lowest speed cap, at 31. Compared to Titania, he has lower speed and skill but higher HP, slightly higher Strength, and much higher Defense. His resistance is slightly worse, as is his luck and magic. Compared to Makalov, he has much worse Speed, better strength, slightly better Defense, similar skill, worse luck, and similar resistance. Overall, he's the most physically durable along with makalov but has weakpoints in his other stats.

Kieran is illustrated in the trading card game Fire Emblem Cipher with the following cards: 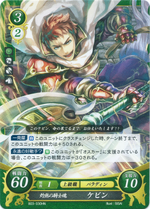 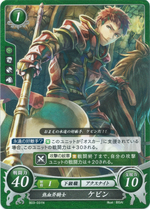