Kieran (ケビン Kebin, Kevin in the Japanese version) is a playable character from Fire Emblem: Path of Radiance and Fire Emblem: Radiant Dawn. He is the sub-commander of the Crimean Royal Knights, and serves under General Geoffrey.

Kieran is first introduced in this game in a base conversation in Chapter 2-3, where he is given a Silver Axe as a gift from Geoffrey himself. Alongside the other Crimean Royal Knights, Kieran will then lay siege to Castle Felirae, essentially falling into Ludveck's trap. The Royal Knights will then rush to Fort Alpea in the next preceding chapter, serving as reinforcements to Elincia's stranded forces.

Kieran later appears as an enemy unit in Chapter 3-12 to the Daein army, representing the Crimean Royal Knights in Geoffrey's absence. The chances of the player managing to engage him in battle, however, are near impossible.

* Depends on the choice made by the player.

Kieran: General... Forgive me! I should have... trained harder...
Geoffrey:Kieran... No! I'm coming to help you! Hold tight! Kieran!! (Kieran dies, game over)

Kieran: Hack... I have dishonoured myself before Queen Elincia!
Elincia: Kieran, you must retreat! Please, don't throw your life away.
Kieran:As... As you wish! (Kieran retreats)

Kieran is a representation of the green cavalier in the classic Abel and Cain Archetype. 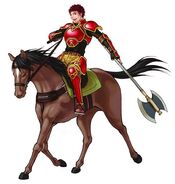