The Killer Axe (キラーアクス Kirā akusu) is an Axe that appears across the Fire Emblem Series. This axe is, as its name suggests, one that drastically increases the frequency at which its wielder successfully performs critical attacks. When wielded by competent axe-users like Warriors and Berserkers, this axe, coupled with their high Strength, grants them the opportunity to defeat enemy units in one massive blow.

Concept artwork of the Killer Axe from Path of Radiance.

The Killer Axe, as it appears in the fourth series of the TCG. 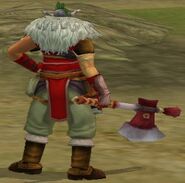 Boyd wielding the Killer Axe in Path of Radiance. 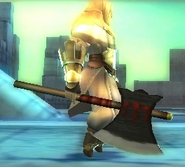