The Killing Edge is Sword that debuted in Fire Emblem: Shadow Dragon and the Blade of Light.

The Killing Edge is a highly potent and lethal Sword that recurrently appears across the Fire Emblem Series. Like its name suggests, the Killing Edge boosts its wielder's Critical rate by a substantial amount.

The potential of the Killing Edge is one that can be fully realised in the hands of Swordmasters, as its pre-existing Critical rate, combined with the added Critical bonus that the class is naturally imbued with, may effectively induce an overall Critical hit percentage that exceeds 50%. The only drawback to this is the fact that this sword is notorious for possessing very poor Durability. Apart from the Swordmaster class, the Assassin class may also stand to benefit by being outfitted with the Killing Edge, as the added critical hit bonus allows them to activate their unique skill, Lethality (Silencer in some games), more frequently, thereby increasing their efficiency in felling enemies.

In addition to the laudable benefits highlighted above, the Killing Edge can also be used as an effective means of training and/or protecting lower-levelled units. For one, this sword requires its user to possess only a C weapon proficiency level to equip, whereas most weapons of equal or greater power require at least an A or an S level. Furthermore, the critical hit boost grants units the ability to inflict massive amounts of damage, a fact that allows them to fell foes with ease, helping them to gain valuable experience at a faster rate. Finally, the lightweight nature of the sword allows for a significant reduction in Attack Speed penalties being sustained by its wielder, allowing for greater precision and the ability to perform double attacks.

In Fire Emblem Fates, the effects of the Killing Edge are bolstered further by having both unlimited durability, as well as the impressive ability to deal 4x damage on a crit, instead of the normal 3x. This is hampered by the slightly lowered might compared to previous titles and lowers the user's avoid by 10%.

Myrmidons usually equip this sword as their starting weapon of choice, with characters such as Navarre, Shiva, Rutger, Guy, Joshua, Zihark and Lon'qu being prime examples.

The Killing Edge is a usable item in Super Smash Bros. Ultimate

It is a battering item with exceptional reach. Occasionally the blade flashes red, causing the next swing or when thrown, regardless if the wielder hits the opponent or not, to deal double damage and knockback.

Concept artwork of the Killing Edge from Path of Radiance.

Concept artwork of the Killing Edge from Awakening.

Concept artwork of the Killing Edge from Fates.

The Killing Edge, as it appears in the fourth series of the TCG. 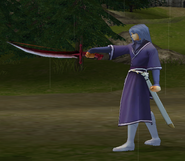 Zihark wielding the Killing Edge in Path of Radiance. 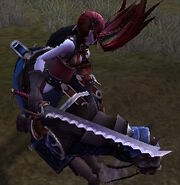 In-game model of the Killing Edge from Heroes. 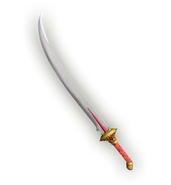