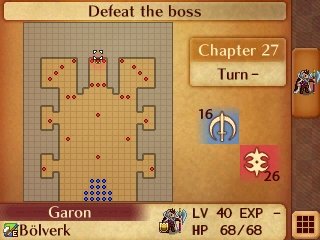 King Garon (暗夜王ガロン Anya Ō Garon, lit. Dark Night King Garon in the Japanese Version) is Chapter 27 of Fire Emblem Fates in the Birthright Version. The player will not be able to save after completing this chapter, nor return to My Castle. The player will also be unable to capture units from this battle because of this. The Capture skill can be used, and the normal dialogue for capturing a unit will display. However, upon completing the chapter, when the player next returns to My Castle, the captured unit will not be in their Prison. This chapter takes place in Castle: Throne Room.

With countless trials, numerous losses, the Nohrian generals dead and nothing left in their way, Corrin and the Hoshidans finally confront King Garon in his Throne Room to dethrone him and end the war. Garon is "pleased" to see Corrin again, mocking them for making it this far. When Corrin tells him about Xander's death, Garon tells Corrin that his family were all pawns for the war, which angers Corrin, who knows that he cannot be reasoned with, and Corrin attacks him. However, their Noble Yato is unable to penetrate his armor, and in retaliation, Garon launches several blows at them. Azura attempts to use her powers to weaken him, but Garon anticipates this and grabs her, threatening to kill her unless they listen to his demands. Ryoma negotiates with him and asks what he wants. Garon demands that Hoshido unconditionally surrender so its lands can be incorporated into Nohr, then states that he wishes to kill Ryoma. Garon sends a fireball at Ryoma, wounding him.

When Corrin tries to figure out how they can hurt Garon and says they need more power, Ryoma's Raijinto suddenly reacts to Corrin's Noble Yato, empowering it into the Blazing Yato. Corrin decides to test the new Yato on Garon, and he screams in pain, stating that it actually hurt. He threatens them with death and calls for his soldiers to kill Corrin and the Hoshidans, but they fail and the Hoshidans fight and defeat him.

As Corrin celebrates victory, Garon, refusing to give up, transforms into the form of the Dusk Dragon and reveals them his true form. He attacks Corrin, destroying the Blazing Yato in the process. As Corrin is left speechless with what happend, Ryoma and Takumi attempt to fight Garon with their Raijinto and Fujin Yumi, but Garon easily wounds them. When he attempts to finish them off, Corrin protects Ryoma and Takumi from being killed, taking the hit for them, and fall into a near-death state.

Prior to the start of this chapter, Corrin's Noble Yato will be upgraded to the Blazing Yato, increasing various stats and enabling them to partially hit through the Dragonskin skill that Garon has. This change is retained even if the player leaves the chapter, so if there are any last-minute preparations involving other battles that Corrin was previously a little too weak for, trying them again with this upgraded weapon may be a good idea.

The enemy forces are far less numerous on lower difficulties. On Normal, the groups in the side rooms, as well as the Great Knights between them, are completely alone. On Hard, they instead have two units per group, while Lunatic brings the total up to four per group (besides the Great Knight groups, who remain at two), as well as adding a few more to the two side rooms in the back. In addition, the General in front of the player's starting location is joined by two similar Generals, and the Berserker in the middle of the map is joined by two others. These Berserkers have skills as well:

As for the units surrounding Garon himself:

On lower difficulties, all enemies generally only carry one weapon, with the Generals, Wyvern Lords, Dark Knights, and Great Knights holding two, a normal melee weapon and a two-range Spear (Dark Knights get a Silver Sword and the Fimbulvetr tome). One of the Dark Knights has the Ragnarok tome instead. On Hard, one unit in each of the siderooms has a second weapon, Tomahawks for the Axe users and Silver Swords for the Bow Knights. Lunatic sees two of the four units in the lower side rooms having Tomahawks, all Bow Knights holding both Silver Swords and Bows, all Malig Knights gaining a Silver Axe, all Dark Knights gaining a Silver Sword, and the Berserker group in the middle gaining Tomahawks. Among the weapons are a Brave Lance for the General in the General Wall in front of Garon, and Brave Axes for the Berserker group in the middle.The two Strategists in the back rooms have the Entrap staff as well, so be careful if going into their range.