Yuri Lowenthal
[view]
“So fun! So! Fun! It was SO fun, seeing you be all like, you know... YAAAAH! BLAMMIE! I want to be just like you, Dad!”
—Kiragi in his paralogue

Kiragi is a playable character in Fire Emblem Fates.

Kiragi is the son of Takumi, the cousin of Shiro, one of the grandsons of Sumeragi and Ikona, and one of the step-grandsons of Mikoto. He was left in a Deeprealm much like the other children of Fates to safely protect him during the war.

In his Paralogue, Kiragi returns from a fishing and hunting trip with a huge haul when he hears a sound coming from the forest. After launching an arrow, he hits an invisible invader and is surrounded by them. As luck would have it, Takumi had decided to pay a visit to his son and makes a timely rescue. Kiragi states that he knew that Takumi would show up and merely made sure to stay safe until he could find him. After the battle, Kiragi is amazed by Takumi's performance and praises him for his battle skills. Seeing how fun it was to fight with his father, Kiragi asks to join the army. Though Takumi wants his son to stay out of the war, his son's enthusiasm and Sakura's comment that Kiragi is like his father have Takumi give up and allow Kiragi to join them. Kiragi decides to celebrate by giving the bear he caught to his father so the army can have bear stew for dinner.

Both optimistic and friendly, Kiragi thinks of everything in a positive way. Kiragi idolizes his father and aspires to be like him one day. Whenever Takumi downplays his compliments, stating that he is not worthy of such praise, Kiragi always tries to cheer him up and inspire confidence, even if he has to cry to make him say it. He hopes to one day be able to wield the Fujin Yumi like his father, but at the present, he cannot wield it. He also loves his mother, but initially refuses to study as he considers it a waste of time. However, in his support with her, after seeing her efforts to make it appeal to his passions, he is inspired to follow through with his education, proving to be an adept scholar when he tries.

Kiragi is a skilled hunter and is his one true passion. Kiragi's skill as a hunter has developed numerous skills including the ability to hide his presence, track targets from a considerable distance to the naked eye, and hit targets from said distances with little effort. He also is a skilled pathfinder, able to travel through very dangerous terrain with little effort. This is evident in his supports with Rhajat and Midori, where he navigates through deadly terrain to obtain ingredients they request.

Despite being royalty, he dislikes being treated like one or being called a prince. His supports with female Corrin show that he left his caretakers because they refused to let him go outside worrying that he might be hurt or killed. This is also evident in his supports with Forrest and Hisame. However, his supports with female Kana show that he genuinely worries about his responsibilities as a prince, and that one of the reasons he is so fond of the forest is because it is a place where he can just get away from everything for a while. This is also noted if he marries, as anyone he marries outside of Corrin in Revelation, states that he leaves Hoshido to stay in the mountains.

He has the sharpest eyes in the army.

Note: Add 10% to all growths if Kiragi inherits the Aptitude skill from Mozu.

*Kiragi will receive whatever secondary class that Corrin has access to if he has achieved an A+-Support with him.

*Kiragi will receive whatever secondary class that Corrin has access to if he has achieved an S-Support with her.

Kiragi's growths vary depending on his mother, but the common trait he has regardless of his mother is his strong Skill growths and modifiers. His Strength and Luck also stays in positive boosts regardless of his mother, so he makes for an exceptional Archer units for landing critical hits and activating skills often. To offset these, Kiragi is fragile like most Archers, especially when caught out by direct combat units as his Defense and Resistance growths are generally low. Kiragi's personal skill, Optimist, is rather limited in its use considering that it only activates whenever he ends without performing any action (it also applies as a "rally" rather then a miscellaneous effect). Despite getting additional speed and extra luck to help his avoid rate, it does leave him vulnerable to attacks.

Kiragi's base class is the Archer class. He already comes with both archer skills, so he can deal extra damage whenever he initiates a fight. From this class, Kiragi can promote either to the Sniper or Kinshi Knight classes. In the Sniper class, Kiragi will benefit from innate bonuses and his high skill will complement the class' very high skill rating, allowing him to take down agile foes. He can learn Certain Blow to further increase his hit rate and Bowfaire to increase his damage when he uses a bow. Due to his father's weapon, Kiragi suffers from movement limitations and can feel redundant to a leveled up Takumi. While he can perform well as a Sniper, Takumi outclasses him due to having access to better movement and a better weapon. From the Kinshi Knight class, Kiragi can learn Air Superiority to be an effective anti-air unit and Amaterasu to help support nearby allies. This fixes his movement and allows him access to lances/naginatas which allows him to perform close range combat without having to rely on a Shining Bow, Mini Bow or a Sidelong Yumi. He loses some strength, skill, and defense but gains 15% in resistance but gains increased mobility but at the cost of terrain bonuses and a weakness to bows and beast killing weapons and skills. Still he can perform well as this class and function as a scouting unit.

As Kiragi shares the same class with his father, he will get the Spear Fighter base set. From this class, Kiragi can learn Seal Defense to weaken opponents for him or other allies to set up a kill, and Swap to take cover behind an ally unit or launch a surprise attack.

The Spear Fighter's promotions are the Spear Master and Basara classes. From the Spear Master class, Kiragi can learn Seal Speed to cripple opponents even further and Lancefaire to boost his damage with lances, although its use is limited unless he is kept in the Kinshi Knight class. From the Basara class, Kiragi can learn Rend Heaven, which will activate often due to his very good skill stat and Quixotic to increase his hit rate to 70% when initiating a fight and to increase his activation rate of skills.

Kiragi is illustrated in the trading card game Fire Emblem Cipher with the following cards: 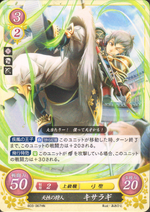 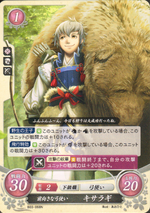 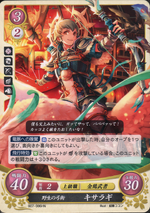 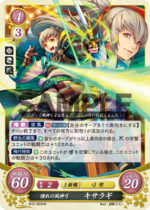 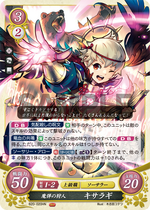 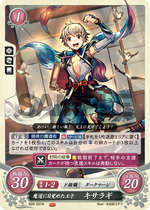 Kisaragi (如月) is the name of a Japanese destroyer boat which means February.

An alternative way of writing it in Kanji is 衣更着, which literally means "wear more clothes" and "rehabilitation of plants" in terms of the Lunar Calendar.