Top of the Charts
Dark Mage (As a Mirage Master)

Kiria is a famous twenty-one year old Idol Singer who receives a lot of support from young people, her stage name is KIRIA. She is a Mirage Master highly skilled in battle and partnered with Tharja. Her birthday is July 12. She’s also referred to as the “cool beauty,” but not many people know her personally and her private life is a secret. She’s a senior to Itsuki and the others, often aiding them.

She's first seen in the prologue saving Itsuki, Tsubasa, and Touma from an ambush and later invites them to her SIV-LIVE concert due to Tsubasa struggling with her lessons. When a Mirage attack happens she's quickly put out of commission protecting Tsubasa. After Ayaha is saved Kiria officially joins the team.

In her first story, she has Itsuki recover her beloved Sir Gen plushie. Unfortunately, Itsuki finds it in tatters and learns how to sew in order to repair it. Touched by his gesture, she uses the situation to improve her new song, The Labyrinth.

In her second side quest, Kiria confides in Itsuki that she actually has a soft spot for cute things. She tried to hide her affections due to fear of being mocked as her imposing image would not gel with being cute. At first she tries to kill her love for anything cute by attacking cute Mirages in the Idolasphere, but finds she's incapable of doing so. Tharja chides Kiria for being so insecure and tells her that she should be herself and not be petrified by others' opinions of her.

In her third side quest she's booked for doing a duet with Tsubasa, but is unsure of how she can act cute. Tharja then leads them to a pair of Mirage Golems she made called Bord and Cord which they'll practice charming. Unfortunately they're hostile and they're forced to fight them. Afterwards she tells Tharja that she finds her to be her ideal partner, making Tharja chuckle gleefully before teasing Kiria about her attraction to Itsuki.

Kiria has a stoic personality and is widely regarded for her "cool beauty." She serves primarily as a "senpai" character as she already has a massive following in Japan as a national idol and has actively fighting Mirages for some time prior to the start of the story. She guides the newest Mirage Masters Itsuki and Tsubasa learn both the ins and outs of Japan's entertainment business and their duty as Mirage Masters.

Despite her cool exterior, Kiria secretly adores cute things. Due to someone she knew that made her feel bad about liking cute things, Kiria has kept such feelings under wraps, believing that such interests are shameful. Despite her attempts at surpressing, she cannot go without her beloved mascot doll, Sir Gen, and has become distraught when it was left behind at a photo shoot. Even the cute lyrics of the Dia Sweet Witch theme caused her to become so enamored that she personally sang a secret cover of the song.

As she forms a bond with Itsuki through her side stories, Kiria becomes more open to expressing her cute side, eventually taking on the role of the cat-costumed Chloe in the late-night program "Absolutely Cute" and singing a cute-and-cool inspired duet with Tsubasa entitled "Give Me!" This ultimately cumulates with her both being able to maintain her cool personality while also doing the cute things she once tried to surpress.

Cool Façade
A singer with a slick image and many fans. Throws herself into battle alongside Tharja. Appears in Tokyo Mirage Sessions ♯FE Encore.

Kiria Kurono - Top of the Charts

After Enter-Kingdom, Kiria eventually continued her music career. Her powerful voice and grand performances continue to mesmerize her many fans, and she continues her busy life as one of the top artists in the country.

After Enter-Kingdom, Kiria's songs stayed faithful to her cool personality, and she remained a charismatic figure in the Japanese music industry. However, though it doesn't quite suit her public image, it's said she always carries around a small beat-up plush doll, inexpertly stitched back together...

"Chloe," the MC of the program "Absolutely Cute!" played by Kiria, became a huge hit, and Kiria made the decision to switch her image to a more hip and cute one. Now, surrounded by the cuteness she loves, Kiria seems happier than ever.

Kiria's new style of being "cool and cute" becomes popular across the world, making her an international star. The Japanese for the trend, "kakkokawaii," enters common parlance across languages, and Kiria's voice continues to spread throughout the world.

Kiria Kurono is illustrated in the trading card game Fire Emblem Cipher with the following cards: 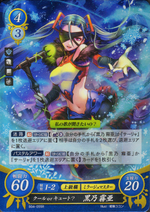 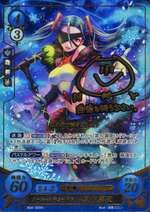 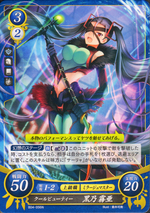 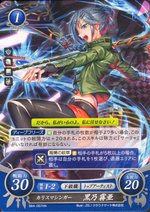 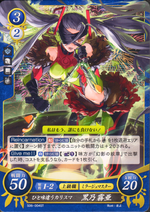 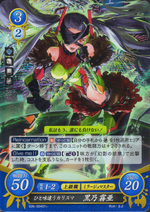 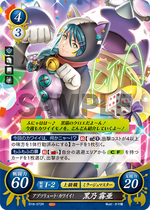 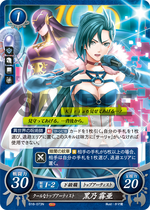 The "Kuro" in her surname means black, possibly a reference to black or dark magic.