The Kitsune is a shapeshifting class introduced in Fire Emblem Fates. Able to switch between humanoid and demonic fox forms with the aid of the concentrated power stored within a Beaststone, Kitsune are the Hoshidan counterpart to Wolfskin.

The Kitsune are a tribe native to Hoshido. They prefer to keep to their hamlet, one that is located deep within Hoshido's southern mountains, and generally avoid humans due to a deep-seated distrust that they harbour against them. According to Kaden in Conquest Chapter 19, this distrust stems from a cautionary tale that suggests that humans are known to kill Kitsune for their fur after having first gained their trust. This has in turn led to the enacting of a rule that all human trespassers of the hamlet are to be killed on sight.

As a result, Kitsune fur is rare and is considered to be a treasured valuable. This is made evident in Selkie's Paralogue, where Daichi and his gang attempt to kill her so that they can sell her fur on the black market. This is also proven in a support conversation shared between Kaden and Charlotte, where she learns that he has been exchanging the fur that he naturally sheds for gold nuggets.

The isolation of the Kitsune has resulted in only a small handful of people knowing of their existence. Amongst these people is Azura, who brings up the suggestion to pass through the Kitsune Hamlet in Conquest Chapter 19 in order to avoid running headlong into the main body of Hoshido's army.

In Japanese mythology, foxes are said to be intelligent beings with mythical powers growing more potent with age. Typically they are called kitsune, though youko is an uncommon synonym.

There are two types of kitsune. The first of these are zenko, ones that specifically serve Inari, the Shinto god of rice, sake, tea, and fertility. The zenko assumes the form of a fox and are benevolent creatures. The second type are known as yako, ones that are notorious for being mischievous pranksters that can, on occasion, harbour malevolent intentions.

Kitsune have many powers, the most prominent being that of the ability to change their form at will. When a kitsune ages, they are said to grow additional tails as a means to signify the growth in their power. When they reach a hundred years of age, Kitsune grow a ninth tail and become near-omniscient with power equivalent to a minor god.

Concept art of a Kitsune 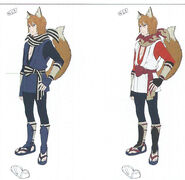 Battle model of Kaden as a transformed Kitsune.