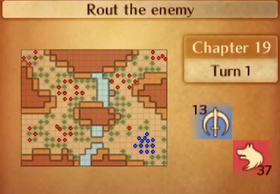 Chapter script
[view]
“After a brief break, Corrin sets out for the Hoshidan capital. Numerous enemies block the way, so the group crosses through the mountains, home of the kitsune.”
—Opening Narration

Kitsune Lair (妖狐の山 Yōko no yama lit. Mountain of Fox Spirits in the Japanese version) is Chapter 19 of Fire Emblem Fates in the Conquest Version. This chapter takes place in Kitsune Hamlet.

The Kitsune and Nine-Tails are Hoshido's versions of the Wolfskin and Wolfssegner respectively. They possess high speed, skill and magical defense, but are frail in both durability and physical defense. Like the wolves, foxes also enjoy reduced movement costs on mountains and forests. Some enemies in this chapter have the ability to create illusions, which disallow the player to attack the enemy and the enemy to attack the player units.

This chapter's main gimmick is the enemies' illusions. This is shown with a green leaf icon on their map sprites. When in illusion form, Kitsune and Nine-Tails cannot be attacked, nor can they attack the player. However, they will still move towards the player's position which can prove troublesome, since all of the enemies have Pass and will require meticulous planning to prevent frail units from being prey to them. Fortunately, the foxes will continually swap between illusions and reality every turn.

All of the Kitsune and Nine-Tails will also have Beastbane, allowing them to shred beast units with ease, so it is not advised to bring any beast-affiliated units. On lower difficulties, this may not matter and you can bring in Keaton or Velouria, who should typically one or two hit the foxes. However, this is not advised on Lunatic as several Kitsune and Nine-Tails will have Life and Death, so opt for a high defense unit like a General or Wyvern Lord, whose naturally high defenses will ensure that they deal little or no damage onto them.

Bringing in anti-beast weaponry like the Beast Killer, Hunter's Knife and Hunter's Bow can help clear out the enemies faster.