Chapter 10B: Caught in the Middle or
Chapter 11A: The Hero of the Western Isles

Edward Bosco
[view]
“I was sent here to protect the villages. I hereby join the Lycian Army to fulfill my mission.”
—Klein when recruited by Clarine.

Klein was born to Lord Pent and Louise, shortly after the events of The Blazing Blade. He was conceived sometime prior to the fight against the Fire Dragon as Louise reveals her pregnancy during the final battle to Pent. He would later become an older brother with the birth of his younger sister, Clarine.

When he was four years old, he fell into an gladiator arena and was almost killed by a lion.  The young mercenary that saved his life, Dieck, was adopted by Pent and Louise, who didn't mind that they fought in arenas, and both were raised basically as siblings. Klein was also best friend of crown prince Myrddin of Etruria. They became childhood friends since the time Klein used to accompany Pent in state visits to the royal palace. The prince wished them to be brothers and ordered Klein to live in the palace, but Klein refused as he wanted to be his knight.

Klein was quickly appointed the Archer General of Etruria. Later during the revolutionary crisis, he became the leader of a mercenary group from Etruria. He hired Thea and her squad of pegasus knights to accompany him on the missions.

His troop is stationed in the Western Isles when Roy's army arrives there. Klein receives orders to enter a battle against Roy to protect the villagers. However, he is persuaded to switch sides by either Roy or Clarine, his bored younger sister that he casually encounters in the battlefield after she ran away home to meet him in his journey. He then convinces Thea to do the same.

He is among the few ones who knows Elffin's true identity. The bard eventually reveals who he is due to their old friendship. He is also worried about Etruria and Reglay political situation and the consequences of the coup, as his parents don't pay attention to the civil conflicts in their dukedom. After the war, Klein becomes an ambassador of Etruria.

Klein is a modest and dedicated young general. Despite being heir of one of most powerful houses of Etruria, he treats everyone equally regardless of their social status, a trait inherited from his parents. His duty oriented personality contrasts with Pent and Louise eccentricity and recklessness though, as he is more concerned with Reglay and Etruria political situation than his parents. With a sharp judgment, he suspected of Arcard's corruption long before joining Roy's army.

He is very fond of his younger sister Clarine, but still considers her to be young and inexperienced, and does not hesitate to scold her when he thinks that it is needed. Their personalities are very different as he is humble and unpretentious and doesn't share the entitlement and arrogance of his sister.

He is somewhat insecure over his recent position as a general. He is uncomfortable with Dieck protectiveness and is embarrassed when he calls him "young master". Despite being a youth and appearing meek at first glance, Klein can persevere more than others, holding such great talent that even Percival says that “Anybody who works under Klein is blessed”. He also is somewhat oblivious about love, as he failed to notice Thea's feelings for him.

Klein is a typical Sniper as reflected by his bases. However, in Hard Mode, his stats will start out higher, giving him a little more consistency. Klein has fairly high growths and decent bases and combined with his stat boost in Hard Mode and high weapon rank, he will be competent throughout the entire game. He is very good at slaying flying units since he tends to kill them in one hit with a Silver Bow, making him great for maps involving a lot of wyverns. Klein has many supports that can fix his low defense, as well as a few that can increase his avoid.

Klein faces some competition as a bow-user, however. Igrene joins not long after him and will typically boast better stats all around (even with Hard Mode bonuses), but comes with a B rank in bows as opposed to Klein's A rank. Shin and Sue also join earlier, boast better mobility due to their class, and in Shin's case also receives Hard Mode bonuses.

Regardless, if actively used, Klein will prove to be a strong, but perhaps not exceptional bow user.

Silver Nobleman
A young general of Etruria. Clarine's brother. Treats all as equals. Appears in Fire Emblem: The Binding Blade.

Klein - Silver Noble (銀の貴公子 Gin no kikōshi, Silver Prince)
"Klein put down his bow and became a ambassador for Etruria, using his charisma to settle many foreign disputes. While he was in office, he ensured all nations prospered as Etruria did." 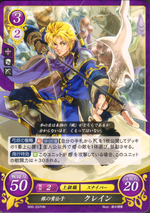 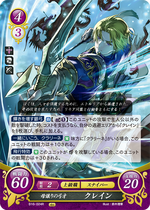 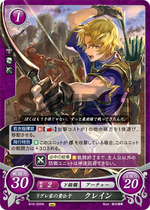 Klein is German and Dutch word for 'small'.