View source
watch 00:44
Who is Kliff?
Do you like this video?
Play Sound

Chris Patton
[view]
“To keep another’s secret is a sign of strength and trust. But when we hold our own secrets in, we’re only judging everyone else. “You can never understand,” we think. It’s sad, but…it’s what we do.”
—Kliff in Echoes: Shadows of Valentia

Kliff is a playable character in Fire Emblem Gaiden and its remake, Fire Emblem Echoes: Shadows of Valentia. He is 15 years old.

Though the villagers of Ram Village know little about Kliff aside from the fact that he moved to the village from a town and lives with his young mother, many rumors surrounded him, such as his father being a wealthy merchant, his mother coming from a village where many sorcerers lived, and that his parents divorced soon after but still provided for the family, and so forth. Regardless, it seems they were still well to do enough to have Kliff attend school in town, but having been bullied at school growing up, and having had a self-centered and smothering mother, he longed to escape his home and broaden his perspectives.

After the war, Kliff bid farewell to Alm and vanished to another continent. Later, a boy claiming to be the son of Kliff served under Alm and displayed a great proficiency for magic.

Due to his intellect and calm personality, Kliff found difficulty fitting in with the energetic children from the village, as he'd rather read instead, having a deep interest in researching and acquiring knowledge regarding history and magic. One such case being when Tobin approached him, getting irritated by his cheerfulness, amidst other things, to the point of dismay, and choosing to ignore him instead.

As a child, Kliff had a timid and sensitive personality, breaking into tears when threatened by Slayde during their encounter.

Talk to him in Ram Village.

Of the three starting villagers in Alm's team, Kliff starts out the weakest and must gain the most levels in order to class change at the first available shrine, but he has the greatest long term potential of the three. Kliff's growths rates are very high across the board, with no notable weaknesses aside from his average strength. He also possesses the highest natural resistance base. Kliff's all around solid stats allow him to function well in nearly any classline the player puts him into, as his high speed growth makes up for the low speed base of classes such as cavalier, archer, mage, and soldier, and his high defenses and good overall stats make him an exceptional mercenary as well. He has relatively few notable weaknesses and can fill any role the player wishes him to in their army.

In Shadows of Valentia, Kliff is one of the weakest of Alm's villagers, starting at level 1, though this time, Faye is the one with the lowest total stats. His growth rates have similarities with those in Gaiden, trading HP growth for Strength, Skill and Speed, and he once again has the highest base Resistance in the entirety of Alm's starting team. In the long term, Kliff's high Speed and decent Skill growths will turn him into a force to be reckoned with, the low starting speed of his possible classes, minus Mercenary, having been fixed by that point. Unfortunately, no matter his class, Kliff will struggle in the early game, as his stats are very low, with the exceptions of Luck and Resistance.

As a Mercenary, it helps Kliff fix his Speed issue immediately and, when he becomes a Dread Fighter, will become practically immune to most magic attacks, thanks to his Resistance and the class's abilities. His low Strength and HP compared to other units remains a problem, though, and makes him less capable than Merc!Gray, though forges can help patch up the former issue. Moreover, his high Speed accompanied with a high growth will make Kliff unnecessarily fast, as any Dread Fighters the player has will easily double most, if not all, enemies.

Cavalier is a great class for Kliff, as he has barely any issues in it, and takes advantage of his growth spread. The combination of good offense, good bulk, high movement, and Kliff's high Spd growth will turn him into a great unit, as it will not take long for him to double most enemies while also delivering solid damage. The only downside would be Kliff's low Skill which can be patched up between the good accuracy of default lances and support bonuses with Tobin.

While Cavalier and Mercenary are the easy promotion options, Archer is arguably the best long-term option. At base, it does not really fix any of Kliff's issues as the class does not provide a Skl, Spd, or Move boost. He does however gain a sizable Str boost and the ability for 1-3 range. His Spd growth will be extremely important here, as he needs to get away from the weight penalty of bows as fast as possible for him to escape his sketchy early combat. Once he promotes to Sniper, his Spd issue should be gone, and forges can fix his average attack power if need be. If trained well, Kliff has the potential to be the best Archer in Alm's path, even surpassing Python, who has Spd issues and lower Def than Kliff.

Soldier is not a bad option for Kliff, though he will struggle a lot until he promotes. Once he becomes a Knight, the massive boosts to Str and Def, combined with the good Spd he should have acquired by then, the good accuracy of lances, his high Luck, and solid Res will turn him into a sort of well-rounded one-man army. He will perform better than Gray, Tobin and Forsyth, but will have less Str and Def than Lukas, in exchange for much better Spd and Res. The remaining issue is the low Movement of 4, which will leave Kliff in the dust compared to the many mounted units and the long range of archers.

Mage is considered to be Kliff's canon class and is a reasonable option. His perks in this class when compared to the other Ram Villagers is his wide spellpool containing Fire, Thunder, Excalibur, Sagittae, and Aura, giving him both strong and long-ranged means of attack. This class also makes Kliff a valuable asset for the early portions of Alm's army as there is a lack of Mage characters in Deliverance until about halfway in Act 3 when Luthier is added and later Delthea after the final battle of said Act (assuming she survives). If looking for a Mage from the Ram Villagers, Kliff is one of the best options. His long term potential is high. While he lacks the explosive power of Luthier and Delthea, Kliff still racks up high damage thanks to a decent speed growth.

Kliff is easily the most flexible of all the villagers (including Atlas), as he does not perform badly in any of his possible classes, capable of becoming a force to be reckoned with in the long-term, no matter what. However, his low bases will hinder him greatly in the early game (minus Cavalier) and he will need some babysitting to get him going.

Kliff is another blue mage, but with as slight twist. He has excellent Spd like most top tier Mages, but instead of explosive damage, he instead has mixed bulk, giving him a surprisingly high ability to tank hits. His Atk is average at best, but this itself serves a particular purpose as well, ultimately contributing to a quirky, flexible mage.

Sagittae has one of the most particular effects that has a bit of weird requirement to use its effects. Aside from the flat 3 Def increase, Sagittae increases all 5 of his stats if his opponent has at least 5 or more Atk than him. At 44 Atk without any skills, Assets, or ally support, Kliff does have a number of units whose base Atk or Atk combined with weapons easily activates his tome. It is often unreliable, but in a pinch and in the right conditions, this tome can immediately pop off.

Growing Light damages enemies in an area around his target based on the different between Kliff’s Atk and their Res. Fortress Defense Resistance boosts both of his defensive stats by 6 in exchange for 2 Atk. The small decrease to his Atk can be beneficial to him to activate Sagittae over certain enemies who are just under its activation threshold. Chill Speed targets the enemy with the highest Spd, reducing their Spd by 7 reducing their ability to double onto him, though there are already few units who can anyways. Fortify Resistance boosts the Res of adjacent allies by 4 at the start of his turn.

Despite his bulk and great defensive qualities, Kliff is no match for most green units who simply smash through him with brute force like Cherche, Lewyn, Nino and tanky ones like Hector and Halloween Kagero to high res ones like Gunnthrá or Julia can take care of him with ease. Specific mage counters like Fjorm, Felicia, and Halloween Sakura are problematic for him as well.

Depending on his higher defensive stat, Bonfire or Iceberg takes that stat and utilizes it for stronger attacks when activated. Draw Back or Reposition are great Support Skills to pull or position allies out of danger respectively. Kliff is a perfect candidate for Close Counter as it serves as the perfect means to counterattack more units, boosting his usage in the enemy phase. Smoke skills are excellent choices as the stat reductions ensures that he is harder to take down or leave them more vulnerable to his own attacks. Run whichever one suits the team or Kliff himself.

"When the war ended, he bid farewell to Alm. Afterwards, he was never seen again."

"With the war over, Kliff bid Alm farewell and vanished—with some speculating that he left for a new continent. Decades later, a young man claiming to be Kliff's son arrived in Valentia to serve the king. The boy was said to have a tremendous gift for magic."

Kliff is illustrated in the trading card game Fire Emblem Cipher with the following cards: 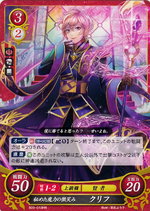 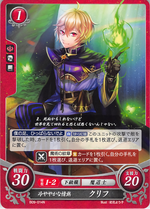