View source
“For knights and cavaliers Lv. 10 and up.”
—In-game description, The Blazing Blade

The Knight Crest (騎士の勲章 Kishi no kunshō) is a promotional item that recurs across the Fire Emblem Series, permitting knight units Level 10 and above to promote into the second tier of their respective class lines. The Knight Crest promotes Cavaliers into Paladins, and Knights into Generals.

In Fire Emblem: Thracia 776, Knight Crests are known as Knight Proofs (ナイトプルフ Naito purufu), and are used to indiscriminately promote all units of Level 10 and above, except those with event-based promotions.

In Fire Emblem: The Sacred Stones, the branching promotion system allows the various knight units to promote into alternate classes. In this regard, both Cavaliers and Knights can be promoted into Great Knights. 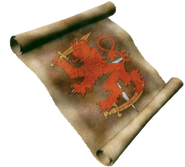 Official artwork of the Knight Proof from the TCG.

The Knight Proof, as it appears in the fifth series of the TCG.

The Knight Crest, as it appears in the sixth series of the TCG.