David Matranga
[view]
“General Duessel... I am not as strong as you. Still, I believe you are right. I, too, shall search for a new path. A path that guides me to realizing the dreams Prince Lyon once held so dear.”
—Knoll, in a support conversation with Duessel

Knoll is a playable character in Fire Emblem: The Sacred Stones. He is one of Grado's royal mages who aided Lyon in his research into the Sacred Stones in an attempt to resurrect Emperor Vigarde.

Prior to the events of the game, Knoll was a royal mage that aided Lyon in his task to resurrect Emperor Vigarde after he died of an illness. Lyon eventually created the "Dark Stone" (which housed the soul of the Demon King Fomortiis). When Lyon showed him an living Vigarde, Knoll was amazed by the revelation. Lyon proceeded to destroy the Sacred Stone of Grado, much to his shock.

Knoll was eventually branded a traitor and was scheduled to be executed one day after the events in Chapter 14B. However, Ephraim and his forces, who attacked the capital, killed Vigarde and found out that there was a prisoner in the cells. Upon arriving, Knoll greeted his supposed executioners, stating that they were early before realizing that they weren't with Grado. Ephraim questioned Knoll about Vigarde and Lyon, which he proceeded to tell them.

Upon returning to where Grado housed the Sacred Twins, Knoll was surprised that both Garm and Gleipnir were still intact, believing that Lyon had destroyed them. He then allows Ephraim to use them in his journey and joins their forces.

After the devastating earthquake, Knoll helps rebuild Grado just as how Lyon envisioned it. Upon doing so, he disappears without a trace.

Knoll is kindhearted and very intellectual, but is secretive and rather elusive because of the troubling knowledge he holds. He rarely talks and keeps to himself mostly, possibly being secure or private-minded. In his support conversation with Lute, she attacks him, as she believes that he threatens her "natural superiority," and that since he uses Dark magic, he is the enemy of light. In addition, in his supports with Natasha, he points out the differences in Dark magic and Light magic, dark being based in knowledge and light being based in faith.

He also seems to know most of the characters from Grado, such as Duessel and Natasha. Despite his aloof and taciturn personality, he is very passionate toward his country, and in his A support with Natasha, he promises her that he will join her in rebuilding Grado.

Knoll joins late into the game and will never have strong combat without unnecessary high amounts of investment, due to his extreme frailty, poor magic type, lackluster growths, and Luck so poor that he will face critical chances from almost any enemy that attacks him. While it is possible to turn Knoll into a decent fighter, the effort is probably better spent on anyone else. He can at least deal decent damage at range due to his high Magic and the might of Flux, but he is unlikely to one-round enemies and should avoid anything that can counterattack him.

As a Shaman, Knoll can either promote into Druid or Summoner. Both classes give him the ability to use staves, which compliments his high Magic base and growths. The Druid class also provides him the ability to cast anima magic, but because of his lackluster growths and their generally weak might, Knoll is unlikely to benefit greatly as a Druid. On the other hand, Summoner allows him to conjure phantoms into battle, which wield a variety of axes. The skill also grants him ten experience regardless of his level, making it a slow but consistent way to level up without investing in direct combat. Phantoms also serve as glass cannons to draw enemy fire and kill enemies, allowing him to bait long-ranged attackers and also more troublesome enemies as the AI always prioritizes targets they have the best chance of hitting.

Overall, while Knoll is a poor choice for combat, his abilities as a utility character make him extremely helpful, especially given his low required investment and the fact that he is one of the only characters who can do what he does.

Darkness Watcher
Royal mage of Grado and researcher of dark magic. He knows the secret of Prince Lyon's change and the Dark Stone's creation. Appears in Fire Emblem: The Sacred Stones.

“In this darkness, I will find peace.”
— Knoll's death quote

“That's the heart of the darkness I've studied? It can't be...”
—Knoll's final chapter quote

Knoll, Watcher of Darkness (闇からの予見 Yami kara no yoken)
"Knoll returns to Grado, where he dedicates himself to rebuilding it and fulfilling Lyon's vision. When the country is restored to its former glory, he disappears without a trace, never to be seen again."

Knoll is illustrated in the trading card game Fire Emblem Cipher with the following cards: 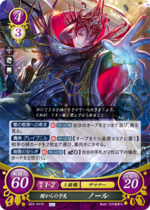 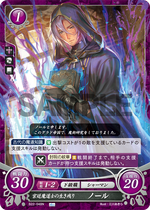 "Knoll" is a direct romanization of ノール, which itself is used in several different contexts. It is the spelling of the French Nord. It is also the translated name of the American furniture company Knoll (which was named after the company's founders).

In English, a "knoll" is a small hill. To "knoll" is to ring someone's "knell", a bell played to acknowledge death. The now-defunct FE Museum site had ノール romanized as Knoll, so it is likely that one of these two definitions was the intended meaning.