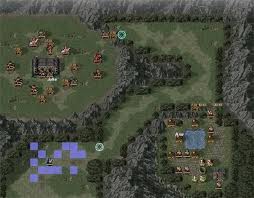 Chapter script
[view]
“Tired from many long battles, Marth and the League arrive at last in Akaneia, Princess Nyna's mother kingdom. Past the mountains lay the royal palace, known to some as Millennium Court; and within its walls awaited many treasures and captives the enemy had taken. With each step, Marth draw nearer to one of the great waypoints in his journey”
—Opening Narration

You will find the first Ballisticians and your first enemy Manakete (that is not required to be defeated). You will also find another Arena that you can use to train your units and earn some extra gold. If you visit Anna, and talk to Jake (with Caeda), you can recruit him.

Try to keep weak units out of the range of the Ballistae. The damage is devastating but their accuracy is horrific, so it might not seem like a threat at first. Make sure to keep your fliers far away from Jake (including Caeda, she WILL be attacked including by Jake and with default unpromoted speed is not able to pass danger zone in single turn.), if you wish to recruit him. A General can be useful for safely taking the Ballistae out if you have one, although a unit with high Resistance (such as your healer) can be used to wear out the uses of the Ballista with Thunderbolt, as it deals magical damage. Alternatively you may choose to reclass Caeda to ground based class, making Arrowspate weapon much less dangerous to her or use the Warp staff if you still have it.

Pay a visit to the arena for some extra cash to buy more items if you are short on supplies. The extra levels will help your units survive Ballistae if they are weak. If you decide to go, visit the homes until you enter the one with Anna, After that, you can recruit Jake. Anna is in the house left of the river.

Differences in Mystery of the Emblem

There is another village where Jeorge resides in due to the removal of his debut chapter. A road cuts through the mountains in the south for easier access to the marketplace.

Jake doesn't appear in this version of the chapter.