Leader of a band of thieves

Brad Venable
[view]
“Shut your dumb mouth! Where would we go at this point? You can't be a thief if you fear death!”
—Kostas

Kostas is an antagonist from Fire Emblem: Three Houses. He is a brigand and the leader of a group of bandits.

Prior to the events of the game, the Flame Emperor hired Kostas and his gang of thieves to attack and kill students from the Officers Academy during a camping trip. Among these students are the three house leaders: Edelgard, Dimitri and Claude.

Byleth and Jeralt come to the students' aid. Together with the house leaders, they defeat Kostas and his thieves. After the battle, Kostas catches Edelgard off guard and attempts to strike her down, only for Byleth to run in and take the blow. This causes Sothis to awaken within Byleth and use the power of Divine Pulse to rewind time. Knowing what's to come, Byleth is able to easily deflect Kostas; who is forced to retreat shortly afterwards when the Knights of Seiros arrive.

A week later, Kostas meets up with the Flame Emperor at the Red Canyon and expresses anger for not being told about the Knights of Seiros being involved. Displeased by Kostas' ineptitude, the Flame Emperor leaves him to fend for himself, effectively condemning him and his gang of thieves to their death.

The Knights of Seiros discover that Kostas and his bandits are residing at the Red Canyon and Byleth - now a newly-appointed professor at the Officers Academy - is sent with their students to subdue the thieves. Kostas refuses to flee, which results in his death at the end of the skirmish.

The next month, a thief from Kostas' group takes refuge at the Abyss and runs into Byleth. He tries to persuade them that Kostas was deceived and begs forgiveness.

A Skirmish at Dawn

Kostas is a Greek name, variant of Konstantinos, originated from the latin Constanine, meaning "constant, steadfast"

“I'm gonna kill you where you stand...”
—Kostas Default Quote

Enemy Deals 1 or no Damage or Misses 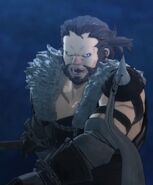 Kostas's battle model as a Thief.