“Every day of my life for the last seven years has been hell because of what that man did. He ruined my life... Even so, he... He pitied me! Can you believe it? He said it was a shame I'd changed, even though it was all his fault! Oh, Shigen... I don't know what to do...”
—Krishna, in a conversation with Shigen

Krisheena (クリシーヌ Kurishīnu, fan translated as Krisheenu or Krishna) is a playable character from TearRing Saga: Utna Heroes Saga. She is both a swordfighter and a thief. She is searching for the legendary ☆Dakruon in order to revive her deceased lover, Aldo.

Krisheena can be duplicated through the use of a glitch.

Until seven years prior to the game's events, Krisheena lived happily with Aldo in Istoria. At that time, she was only an ordinary village woman. One day, Vega came to their village to have a duel with Aldo. Despite her attempt to stop Vega, he killed Aldo and left with his decapitated head. Afterwards, she began her journey to resurrect Aldo and endured hardships along the way.

Krisheena is introduced when she is working for the Isla Pirates led by Maerhen. During a battle between the Isla Pirates and the Sea Lion led by Holmes, she decides to help Renee, who is Maerhen's hostage. After Renee is pushed overboard Maerhen's ship by his men, Krisheena betrays them and joins Holmes's crew. If Vega was sent with Holmes after the first route split, she meets him and declares that she will avenge her lover. Due to her inability to kill Vega due to their large skill difference, she persuades Shigen to do it for her. However, once Shigen engages Vega in a duel, she realizes that her actions are not what Aldo would have wanted and tries to stop them. Due to their refusal to listen to her, she convinces Holmes to intervene and forcibly end the duel.

After Holmes obtains the ☆Dakruon, Krisheena steals it from him and travels to the Tower of Morse alone. There, she learns from Meeme that Aldo cannot be revived because too much time has passed since his death. She is also recruited back to the army by either Holmes or Shigen.

Depending on events triggered during the story, Krisheena can accompany Shigen while he travels around the world with Runan, Holmes, Enteh, and Katri. If this does not occur, she travels with Vega until they arrive at her home in Istoria.

Krisheena will automatically join in Map 13 once a player unit boards Maerhen's ship.

Once she steals the ☆Dakruon, she can be recruited again on the fifth floor of the Tower of Morse by Shigen or Holmes.

Krisheena is a very weak fighter from the moment she joins, being under-leveled with poor base stats. To make matters worse, her growths are some of the worst in the game, fitting her role as a thief, which is a class mostly consisting of weak units in TearRing Saga. On the positive side, she does learn the very potent Rising Dragon skill fairly quickly, which can help bolster her offenses. She also possesses decent growths in Weapon Level, Speed and Luck. Advantages aside, she is outclassed by Vega, Julia, Shigen and Yoda, all of whom possess generally better stats and skills. If the player intends to use Krisheena, she is best used for her Steal skill, not for a combat role. 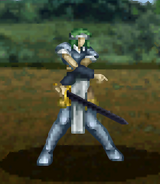