Student at the Officers Academy (As Monica)

Chapter 6: Rumors of a Reaper (As Monica)
Chapter 10: Where the Goddess Dwells (As herself)

Chapter 10: Where the Goddess Dwells

Colleen O'Shaughnessey
[view]
“You're just a pathetic old man. How dare you get in the way of my brilliant plan...you dog.”
—Kronya to Jeralt

Kronya is an antagonist from Fire Emblem: Three Houses.

Kronya hails from Agartha and is one of Those Who Slither in the Dark.

During the Horsebow Moon of 1180, the Death Knight kidnaps Flayn, and when Byleth and their class rescue her, they find an unconscious Monica at her side. Monica quickly recovers and re-enrolls in the Officers Academy as a member of the Black Eagles. Other students and members of the Monastery observe that she grows quite close to Edelgard and that her personality has completely changed. Her personality shift is largely attributed to her apparent year in captivity, though in reality, it's simply Kronya's true personality peeking through her disguise.

Kronya reveals her true identity after Those Who Slither in the Dark are defeated by Jeralt, Byleth, and some of the students of the Officers Academy while experimenting on other students. As Monica, Kronya pretends to have been one of the captives, approaching Jeralt to thank him, but once he turns his back on her, she stabs him. Byleth attempts to use Sothis's Divine Pulse to stop her, but Thales appears and blocks Byleth's attack on her. She expresses shock that Thales made an appearance, but he teleports her away with little explanation.

Later, Thales and the Flame Emperor are discussing Kronya's carelessness, as her death would have revealed the truth behind Those Who Slither in the Dark's identities. Thales tasks Kronya to team up with Solon, a prospect she expresses excitement for. Kronya engages Byleth and their students in battle once more, taunting them and revealing her true appearance, but is defeated. Before Byleth can cut her down, Solon appears and grabs Kronya's heart, which shocks Byleth in horror, using her in order to enact a ritual that will banish Byleth and Kronya to the dark dimension of Zahras. Kronya's sacrifice ends up for naught, as the power of Sothis frees Byleth from this dark dimension and Solon is killed shortly thereafter.

Kronya appears as a cheerful young woman whose childish disposition belies her underlying brutality. She is sadistic and cruel, enjoying inflicting pain onto others such as committing murder with a smile on her face. During her fight, she looks down upon those she believes inferior to her and refers to enemies as "Vermin" throughout her fight. She shows surprise when Solon turns on her and is not above pleading for her life, as her final words were asking Byleth to save her despite being enemies.

While disguised as Monica, Kronya made no attempt to replicate her personality. While this drew attention to her especially toward Hilda, most students chose to ignore Monica's "personality shift" as they believed it was merely a coping mechanism after her kidnapping ordeal.

Gleaming Blade
One of those who slither in the dark. Hateful, merciless, and diabolical. Appears in Fire Emblem: Three Houses.

Kronya is an incredibly dangerous Grand Hero Battle unit who is incredibly potent as either an offensive or defensive dagger unit. While her overall bulk is passable, but able to fully tank some hits, she is focused more on her offensive stats with an incredibly fast base 39 Spd and 45 Atk when equipped with her weapon. While the latter may not seem as high as some units, Kronya is nonetheless a unit whose power comes from her unique weapon that carves a powerful niche.

Athame grants her a +3 Res boost and if her opponent has less than 100% health, she gains +5 Atk/Spd, giving her a base 50 Atk and 44 Spd, and has a Vantage effect, initiating combat during her opponent's turn. Finally, after combat where she attacked, she inflicts [Dagger 7], inflicting Def/Res-７ to her opponent and enemies within two spaces of her opponent. With specific inherited skills in tandem with Athame, Kronya is a troublesome opponent and can easily slaughter her foes if they do not handle her properly. That being said, to be at her most potent, Kronya requires high investment and luxury skills in order to reach her pinnacle of performance.

She has Luna for her special, ignoring 40% of her opponent's Def when it activates. Desperation allows her to instantly perform her follow-up attack so long as she initiates combat. With Athame active, she can easily overtake most foes to get her guaranteed double attack. Distant Guard grants her allies within two spaces of her a Distant Defense effect.

Kronya absolutely needs her opponent's to be injured to maximize Athame. Enemies who carries healing skills or staff users can instantly negate this effect. This is troublesome on Aether Raids offense as enemies can use a Heal Tower to help them recover health. Her desired skills also makes her susceptible to high bulk units who can tank her hits and retaliate, however there are few units who can do this such as Caineghis. Units who can stay at full health and destroy her with Brave attacks like Altina, Elincia, and Cherche can exploit her lower Def. Dazzling Staff units also negate her ability to counterattack and make full usage of Athame, making them a decent option, though they do target her much higher Res.

Savage Blow is a must of Kronya just to get her Athame going and taking it as both her Skill C and Seal is highly advised just to soften her enemies and prepare to kill them on her enemy turn. Even if she is going for a budget variant. Moonbow charges much faster than Luna for a slightly better and consistent activation. Either Reposition or Draw Back are excellent Supportive skills to manipulate ally positioning. If using her on a budget, Fury is a safe Skill A just for the flat boosts to her stats.

For those willing to sacrifice some luxury units, she is an excellent recipient of Close Counter just to ensure that she can decimate her opponents, regardless of their attacking range. Her ability to kill her foe once she has Moonbow active is high and using Special Spiral for her Skill B will ensure that it is ready every time she goes into combat.

Kronya is illustrated in the trading card game Fire Emblem Cipher with the following cards: 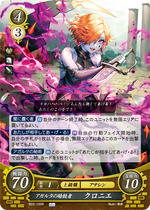 Kronya has origins in Kronia, an ancient festival in honor of the Greek god Cronus.

Monica is a name of uncertain origin, probably originates from the Greek Monikos derived from the word monos, meaning "one," "lonely," and "widow."