Oni Chieftain
[view]
“This war ends now... And the way to peace begins with the Nohrian king's death.”
—Kumagera attempting an assassination on King Garon in Chapter 14.

Kumagera (クマゲラ) is a capturable boss character who appears in Fire Emblem Fates on the Conquest route. A general of Hoshido, Kumagera leads an ambush force in an attempt to assassinate King Garon of Nohr in the Opera House of Cyrkensia.

Leading an assassination force in Chapter 14, Kumagera appears following the performance staged by a mysterious songstress that subjects King Garon to extreme pain. On seeing the Nohrians get up to pursue the songstress, Kumagera stops them in their tracks, demanding that they retreat as he personally ends King Garon's life. The Nohrians refuse to heed his demand, prompting Kumagera to turn hostile and lead an attack against them. The ensuing battle concludes following Kumagera's fall or capture.

Kumagera will be added into the Unit Logbook as soon as he is persuaded to join the player's army in Conquest. In order to use him in either Birthright or Revelation, both of the said paths of Fire Emblem Fates must be purchased through the same cartridge or same saved data on their Nintendo 3DS.

Although not much is known about his personality due to the minor role he plays, some of his aspects can still be gleaned based on the lines he speaks in the chapter he appears in, as well as when faced in battle. For one, Kumagera is an individual who will stop at no cost till his objectives have come into a conclusion, as well as believing it will lead to a better cause. Much of this is shown in the Conquest route in his attempt to assassinate King Garon and hoping the world will be at peace once he is removed from the throne.

Despite having such a menacing appearance, Kumagera is shown to be merciful towards the other enemies that are affiliated with Garon and even prefers them not to get involved as they are not included in his personal agenda and since his mission only involves killing Garon himself. This is shown in his conversation with Leo and Corrin when he appears after halting them from chasing after a mysterious dancer, after her performance had harmed King Garon. If his enemies desire to engage him however, he will have no choice but to turn hostile and remove them from his path, while still giving them a chance to back down when confronted.

NOTE: Inventory is cleared upon capture

As a boss, Kumagera has a few tricks up his sleeve that may catch players unaware, despite his seemingly unassuming stats. On Hard and Lunatic modes, he gains access to the Countermagic and Darting Blow skills. Attempting to exploit his poor Resistance can prove lethal as a result of Countermagic, and Darting Blow allows him to be fairly adept at performing double attacks during his turns. In addition to these merits, Kumagera is also blessed with a decent Critical rate. Also, on Hard mode and higher, a Shrine Maiden with the Entrap staff is positioned in close proximity to him. If a stray unit is pulled into a space within Kumagera's attack range, he or she will be trapped in a duel to the death with him. Killing Kumagera prematurely is detrimental to the player, as this prevents him from being captured and threafter recruited. Doing so will require the player to defeat him with Niles, a task that will prove difficult if he is not well-trained by this point.

As a playable unit, Kumagera is quite useful, especially if he is captured on Hard mode or higher. He has excellent HP and Defense, and his Speed is decent enough to avoid being doubled by most enemy classes. Countermagic will also offset his low Resistance by allowing him to inflict hefty damage against magic-wielding units. Darting Blow allows him to double enemies near or at his speed and prevent the enemy from doubling him if he attacks a unit that has better speed than him. Finally, Certain Blow will increase the accuracy of his hits, something which helps greatly with the very poor skill Oni Chieftains are known for.

Since Kumagera starts off as a Level 1 Oni Chieftain, the player will need to train with him greatly as he has none of his class' signature skills on him; Death Blow and Counter. Death Blow allows him to deal critical hits more reasonably, but is better done with other units like Arthur who will have better critical hit rates compared to him. Counter, conversely, will boost Kumagera's defenses, a fact that is especially crucial on Hard or Lunatic mode, as he will basically become a very powerful tanker, punishing anyone using magical weapons or fighting him in close quarters.

As an Oni Chieftain, Kumagera's base class set is the Oni Savage. His only other reclassing option is the Blacksmith class, one that affords him the Salvage Blow and Lancebreaker skills. Salvage Blow's use is almost nonexistent due to his abysmal Luck, but Lancebreaker will give him the upper hand when facing the more accurate Lance and Naginata-wielding foes, especially if he is using inversed weapons like the Dual Club.

“We're not leaving until King Garon has met his maker. Stay out of our way!”
—Kumagera's pre-battle quote.
“Damn you... King Garon...”
—Kumagera's defeat quote

Kumagera is the Japanese name for the Black woodpecker (Dryocopus martius).

This bird-based naming convention is shared with Haitaka, another capturable Hoshidan general.

"Kuma" and "gera" can also translate to bear and galley respectively, fitting both his physical build and his role as a general. 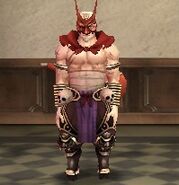