Prince of Goldoa
King of Goldoa (After Part 4, Endgame: Rebirth 3)

Brandon Winckler
[view]
“Sweet courtesy is ever the herald of hospitality. Will this suffice to explain my actions?”
—Kurthnaga to Ike on Nasir's ship en route to Begnion.

Kurthnaga is a non-playable character in Fire Emblem: Path of Radiance, and a playable character in Fire Emblem: Radiant Dawn. He is the prince of Goldoa and Dheginsea's youngest child. His siblings are Rajaion and Almedha, and he is also the uncle of Soren. Despite his young appearance and status as the youngest dragon across all the clans, he is over 100 years old.

Ike's group meets him first in Path of Radiance while stranded in Goldoa. He assists the mercenaries by freeing the ship and sending them on their way. He is the first dragon to change the mercenaries' minds about the dragons. His kind character convinced them that dragons were actually a great species.

In Radiant Dawn, he leaves Goldoa, along with Ena, to stop the war between Begnion and the laguz, and to find his sister. He first appears in Daein as a pilgrim named Kurth who has been detained by the Begnion Occupational Army. He, Ilyana, and Aimee were rescued by Micaiah and her crew from Gribe Prison, and temporarily traveled alongside her afterward.

He becomes Goldoa's new king following Dheginsea's death in the Tower of Guidance at the end of the game and vows to uphold his father’s wishes as the new Black Dragon King. During the epilogue (when certain conditions are met), he is the only person besides Almedha to know the truth about her son.

In the end, he opens Goldoa to the rest of the continent, so that everyone can thrive in peace and Ashunera can come back to Tellius.

A soft-spoken, well-mannered and a shy character, Kurthnaga can be considered rather different than the other dragons, as he is vigorous and filled with boundless curiosity. He has great interest in the affairs of other countries, and while normally a reserved person, he can get a little excited, as seen when he visits the desert for the first time.

He also has a strong sense of justice, even leading him to impulsively intervene in the Laguz-Begnion War. and eventually making him confront Dheginsea. Such resolve only strengthens after the death of his father.

It is revealed in Radiant Dawn that he is hemophobic, meaning that he is afraid of blood. This is largely shown in chapter 4-1, where he refuses to fight, and cowers from Ike when he sees blood on his sword.

Kurthnaga joins in the endgame with underwhelming bases, but he has great potential. Upon gaining formshift, if trained properly, Kurthnaga is effectively a laguz royal. With the right skillset, Kurthnaga is a force to be reckoned with, and is practically unstoppable. "ParaBlossom" is a great idea, considering his growths in Strength, Speed, and Resistance will skyrocket if used. His Defense will grow well as well, with his Skill remaining mediocre. He is nearly immune to most damage once trained. Celerity is useful due to his low movement, and Nihil will be useful once you recruit Nasir. He'll make decent use of Ire. It won't activate super often due to his low skill, but considering his laguz royal status, he has 100 skill capacity after reaching Level 30, so he has the room for it. While there are many uses a trained Kurthnaga possesses, his starting stats make him difficult to use effectively. He will usually take little damage, but his damage output is somewhat poor, as his Strike level starts at A, which is underwhelming. Part 3 of the endgame could allow him to grind against Dheginsea, and possibly get him to SS strike, as well as cap many stats if blossom is assigned. Overall, Kurthnaga is a powerful unit once trained, but his bases will make this difficult.

Autumn Goldoan
The prince of the dragon tribe of Goldoa. Intent on using the harvest festival as a chance to build amicable relations with other peoples. Appears in Fire Emblem: Radiant Dawn..

Kurthnaga spends his days arbitrating conflicts between nations, guarding the peace so many had died for.

Kurthnaga: I am... King Deghinsea's heir! I cannot die! I have to return home... I must survive... No matter the cost...

“For..forgive me... I'll hold you back in this condition... I don't want to be hindrance. I'll rely on my own strengths...from this point on. I hope to see you again someday.”
—Kurthnaga's defeat quote as a NPC in chapter 3.

Kurthnaga is illustrated in the trading card game Fire Emblem Cipher with the following cards: 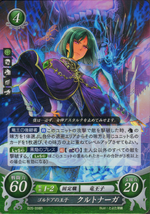 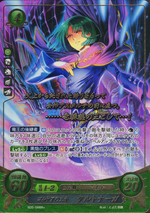 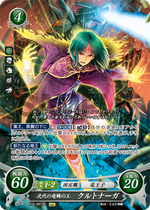 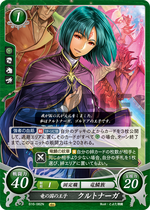