Cavalier
[view]
“I don't waste time. I take care of my weapons, my horse, and myself. And not just that–I also make sure our morale is good and our men are safe.”
—Kyle to Forde

Kyle is a playable character from Fire Emblem: The Sacred Stones. He is an intensely loyal and intelligent young knight who is very concerned for Ephraim's well-being. He is very devoted to Ephraim and a fierce rival, yet also best friend to Forde. Their rivalry seemingly started out from a tournament, in which he was defeated by Forde, which made him start focusing on his training to never lose to him again.

Very chivalrous and proper, Kyle is a classic knight, much like Kent from Fire Emblem: The Blazing Blade. His devotion to his status as a knight has him come off as a little too serious for some, although he learns to loosen up during his conversations with Forde and Syrene. After the war ends, he becomes a battalion commander for Renais, and can marry either Syrene or Lute, or spend the rest of his life alongside Forde in his support endings.

In his B support conversation with Forde, it is revealed that Kyle has a sister named Mia, who married into a well-off Frelian family. In his A support with Syrene, it is mentioned that when she gave him a carved figurine of a pegasus knight, he started to collect wooden figurines. This is also mentioned in his A support with Lute.

*85% in the Japanese version

Kyle is a cavalier that joins in chapter 5x alongside Ephraim, Forde, and Orson, separate from Eirika's group. Of all the cavaliers, his stats are mostly focused on his very impressive HP, Strength, and Defense that are the highest of all the cavaliers while still having decent Speed and Skill, with his weakest stats being his Luck and Resistance. Kyle is the strongest and most durable of the trio that consists of him, Forde and Franz, though he is also the slowest and most vulnerable to magical dangers. His physical stats are overall the most impressive of the three of them, which makes him a very powerful unit in the player's roster, though Franz's higher availability will probably give him a level advantage by the time they both join and will have made him more helpful in the chapter's leading up to his join time. Notably, even in chapter 5x, his higher Constitution makes his Speed equal to Forde's unless the latter uses a very weak but light iron sword.

Like all cavaliers, he has a high seven Movement, Canto, and weapon triangle control with swords and lances that allow him to have the advantage in every fight while giving him 1-2 range weaponry with javelins and rescuing utility. Because of his very high HP and Defense, he is very physically durable and can survive far more damage than others can as a result, especially with his weapon triangle control boosting his avoid. Even though his is the lowest of the three, his Speed is still fairly good, and once he has grown it high enough, it and his sky high Strength will let him one round nearly any normal enemy, if not one-hit them, even at range. He is weak to magic however, especially in the form of long range status effects, but players can counter this with holy water or the barrier staff quite easily.

When Kyle promotes, players can promote him into either a paladin or a Great Knight. As a Great Knight, he will have slightly higher strength and speed by one point and will give him uses axes, but also lowers his movement while retaining his mounted terrain penalties. It also increases his con, which makes it very difficult for units to rescue him while also letting him use the heaviest of weaponry slightly better, with both cases being magnified by how his was already above average. As a paladin, he gains slightly less speed and strength, but his movement is increased to eight rather than it being dropped to six.

In the main campaign, a promoted Kyle will already be entirely capable of dominating most enemies even without the slightly higher Great Knight bonuses and without axes. He far more appreciates the movement bonus, which will allow him to reach and defeat enemies faster while also allowing him to make better use of his mounted utility. However, if a player elects to play the postgame, where statsboosters of all kinds may be farmed, and where stat caps matter much more, Great Knight may be the better choice.

Kyle, Ardent Knight (情熱の騎士 Jōnetsu no kishi)
His service to the royal family of Renais continued without change. He became a battalion commander and gained much trust and responsibility for training new recruits.
A Support with Forde
Sometimes, the greatest friends also differ greatly in personality. When Kyle and Forde returned home, they were celebrated in song and story. They lived their days in happiness, as dearest friends and toughest rivals.
A Support with Lute
After the war, Kyle and Lute were married in Renais. Kyle's friends were disturbed by his choice of brides, but they could not deny his happiness. Before long, they had a son, and Kyle dedicated himself to his upbringing.
A Support with Syrene
After the war, Kyle visited Frelia, where he was greeted with a warm reception by Syrene. After the two retired, they were wed. They raised a daughter whose skill in martial arts and etiquette excelled.

Kyle is illustrated in the trading card game Fire Emblem Cipher with the following cards: 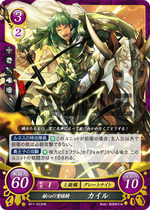 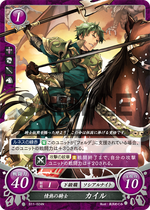 This name comes from a Gaelic word meaning "narrows, channel, strait." Forde's name also refers to a river, although it is Nordic in origin.

Kyle's portrait in The Sacred Stones.

Kyle's attacking animation as a Cavalier with a sword.

Kyle performing a critical hit as a Great Knight with a lance.