Landon McDonald
[view]
“Certainly, Captain. I'd be happy to. We'll neutralize anyone in your way. You can count on me, sir.”
—Kyza in Radiant Dawn

Kyza (Kysha in the PAL region game versions) is a playable character from Fire Emblem: Radiant Dawn. They take on the role of a laguz officer, serving under the command of Ranulf. Kyza is a superior officer to Lyre, and keeps her from acting out against others, alongside fighting over Ranulf's attention with her.

Kyza is a rather dutiful and loyal individual, but is perceived to be boring, stiff, and humorless by others around them. They are essentially the polar opposite of Lyre, with their differences repeatedly leading to heated arguments breaking out on a regular basis especially when competing for Ranulf's attention. Despite these feuds, Kyza and Lyre are close friends. Kyza tries to resolve conflicts within the army, calming Lyre down after Shinon offended her with bigoted slurs, and apologizing to Shinon on her behalf.

Despite their normally serious and formal demeanor, when around close friends they change their behavior and talk and act in a more feminine way.

Kyza has an obsession with their superior officer, Ranulf, and repeatedly tries to gain his attention.

Kyza, much like Lyre, has poor Base Stats, but high growth rates. Both Lyre and Kyza are poor starting out and may be chosen over the other Beast laguz because they are easy to use and train. However, the other beast laguz have very poor growth rates, but much better base stats. To make the best of them, follow the same strategy as Lyre: Blossom + Paragon.

Tiger of Fortune
A tiger warrior from Gallia, home of the beast tribe of laguz. Serious and dutiful, not even New Year's celebrations can keep them from their training. Appears in Fire Emblem: Radiant Dawn.

Unique C Support line with Ranulf
Kyza: Oh…Captain Ranulf…hello! If only we could secret away and…catch our breath! I trust all is well.

Unique B Support line with Ranulf
Kyza:Captain Ranulf, I’ll cover you! But you know I won’t be able to protect you unless you stay very close to me.

Unique A Support line with Ranulf
Kyza: Must survive and complete my mission. Must not let anyone else die. Captain Ranulf, especially you. Hold on, tight, dear sir!

Kyza is illustrated in the trading card game with the following cards: 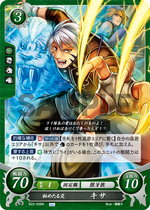