Carrie Keranen
[view]
“I have no need of luck, you see, for I benefit from divine grace!”
—L'Arachel talking to Joshua in a support conversation.

L'Arachel is the Princess of the theocracy of Rausten and the niece of the Divine Emperor Mansel, Rausten's Pontifex and Lord.

L'Arachel first appears in Serafew, where she, Dozla, and Rennac witness Eirika and company as they fight off the monsters in the Za'ha Woods. Seeing the action, L'Arachel and Dozla wish to engage in battle with the monsters, but Rennac stops them from doing so, stating that they should find a safer way down to avoid injuring themselves, which they heed. The three take a different path, and by the time they arrive on the scene, Eirika has defeated all the monsters. L'Arachel is disappointed that she was unable to show off her skills, but glad that the monsters were defeated anyway. When Eirika asks L'Arachel about her, she begins to introduce herself, but Dozla stops her, reminding her to remain anonymous. The three then ride off, with L'Arachel leading the way.

Being abandoned by Rennac shortly after, in Chapter 14 of either route, L'Arachel can recruit Rennac if she talks to him during the battle. Though Rennac had been hired by the Grado Empire, L'Arachel's strong personality brings Rennac back into her company, and therefore also Renais'.

After the final battle, she asks Eirika to join her tea club and departs to Rausten, to eventually succeed her uncle as ruler, and marries Innes or Ephraim if they have an A support.

As the princess of Rausten, L'Arachel is spoiled and does not know much about fighting. Often portrayed as completely self-obsessed and egotistical, at many times comically because of it, she is actually very helpful and kindhearted, providing information and support to both Ephraim and Eirika and comforting them in their time of need. Despite the apparent honor of her desire to rid the world of darkness and evil, she is also driven by a more-or-less selfish desire for fame.

A very excited person who is always ready to help someone in need, she also seems to believe that fighting for the greater good should be enough of payment; that reasoning leading to never paying Rennac even when he asks for it. In a support conversation with Joshua, she states that she does not believe that she needs luck, that she benefits from "faith". This is proven when Joshua tries to bet with L'Arachel and continuously loses, despite the fact that he attempts to fix the game in his favor.

She fights for justice and order, emulating her parents who died doing the same when she was a little girl.

*In Eirika's route
**In Ephraim's route

L'Arachel's usability differs radically depending on whether or not the player wishes to engage in Skirmishes or enter the Tower of Valni. Her high bases (relative to her level), great growths, access to staves, and above average movement mean that she will perform very well if raised to a high level. She will often max out all of her stats aside from her HP and Defense. Her HP issues can be greatly mitigated using an Angelic Robe, and her defense is actually the second best among the game's magic users, largely thanks to her abnormally high base stat in that regard. Thanks to her high speed and luck, she will be very good at avoiding attacks, making up for her poor HP. Her resistance and magic will also end up quite high, making her a great candidate for baiting attacks from enemy mages, or killing them outright. All of these factors mean that L'Arachel will be able to offer great contributions despite her late start, if the player uses the Tower to train.

If the player does not elect to go to the tower or utilize skirmishes (either to avoid grinding or to complete a challenge run), however, L'Arachel's prospects are extremely grim. She is very notably the last unpromoted healer you recruit in the game, and comes quite underleveled by the time she joins. Surprisingly, she starts with a D rank in staves, putting her at an immediate and significant disadvantage when compared to Moulder and a promoted Artur. Because of her limited access to staves, she will have trouble gaining the 700 EXP necessary to reach level 10, and getting a full 1700 EXP onto her would require the player to slow their pace tremendously. Finally, Troubadours have undergone a nerf to their movement in The Sacred Stones, and L'Arachel's competition will likely have 6 (or even 7) movement by the time the player has recruited her. Simply put, L'Arachel is not cut out to be a mainstay in efficient, low-turncount playthroughs without serious tower abuse. If the player uses the Enemy Control glitch, you can give L'Arachel an Evil or Crimson Eye, helping her gain EXP, although Evil Eye should be the players first choice, as Crimson Eye will slow L'Arachel down considerably.

Whether she chooses to promote into a Valkyrie or Mage Knight, her stat caps are identical except for 1 point of resistance; which she will probably max regardless. The choice on whether to promote her to a Valkyrie or Mage Knight comes down to the player's needs and preferences. Anima magic is typically (ironically) lighter than light magic, so it fits well with L'Arachel's low con, but Ivaldi is more useful to L'Arachel than Excalibur is,and she appreciates having a weapon triangle advantage over monsters.

Princess of Light
Princess of Rausten. Dozla and Rennac accompany her on their quest to defeat the monsters around Magvel. Appears in Fire Emblem: The Sacred Stones.

L'Arachel is a blue mage cavalry unit that plays more typical to her role than Reinhardt. While she lacks Reinhardt's ability to destroy whatever he comes across in one round, L'Arachel instead is speedy and a notable amount of Resistance to boot (the highest among mage cavalry in the game), while also still packing quite a punch thanks to Ivaldi. Her weapon's bonus can trigger on both player and enemy phase, meaning she can win most mage matchups even without the typical cavalry support.

Within her base kit, L'Arachel is mostly geared to combatting other mages and sometimes Dragons, but leans toward being placed on mixed teams thanks to Res Tactic. Renewal means she can heal off small damage and return to full health where she can trigger Ivaldi's bonus. Growing Light is an AOE special that blasts the target and anyone two spaces away from it, but this is tricky to activate, as it can only go off right before she initiates combat. If an enemy gets in on her and abuses her abysmal defense and HP stats, L'Arachel might not have time to get it off.

Due to her low Defense, L'Arachel's biggest problems are units with Distant Counter who can target her low Defense. While being blue is a blessing due to most innate Distant Counter users being red, they will still deal remarkable damage to her if they retaliate, especially Aether users such as Ike. Dragons who use Expiration or refined Lightning Breath can also target her weaker Defense, potentially killing her in one shot, and users of Vengeful Fighter will defeat her on the counterattack if she cannot finish them off.

Given that she is a mage cavalier with good offensive stats, L'Arachel will want skills that build upon her strengths in order to be a potent force in the Player Phase.

L'Arachel ideally wants the rare Swift Sparrow to amplify her offensive stats and pick enemies off. She will also want B Tomebreaker to deal with enemies whom she has the hardest time getting through. Being able to Reposition allies will be useful as well. For the Special, L'Arachel will want to replace Growing Light with a low-cooldown special like Moonbow or Glimmer. Her choice of C skill will depend on her team.

Harvest Princess
Princess of Rausten. Enthusiastically participating in the harvest festival alongside her attendant Dozla. Appears in Fire Emblem: The Sacred Stones.

Seeker of Justice
Niece to Pontifex Mansel and princess of Rausten. Her ultimate ambition is to rid the world of monsters. Appears in Fire Emblem: The Sacred Stones.

L'Arachel, Queen of Light (光の聖皇女 Hikari no Sei-kōjo)
"She succeeded her uncle as ruler of the Rausten theocracy several years after the war ended. She never lost her unique perspective on life. She spent much of her rule visiting the neighboring countries."

A Support with Innes
"Stories tell of the sparks that flew between L'Arachel and Innes when they first met. As the love between them flourished, so too did the bond that united their two nations."

A Support with Ephraim
"Ephraim and L'Arachel each returned home after the war, but L'Arachel visited Renais often. Over time, the two were wed. Their marriage threw Rausten into turmoil, but L'Arachel's self-centeredness carried the day."

A Support with Dozla
"L'Arachel was, in time, made queen of Rausten, with Dozla at her side, as always. Later, Dozla wept like a baby when L'Arachel was wed. His emotional outburst is remembered as much as, if not more than, the ceremony itself."

Eirika's Route
Eirika: You! L'Arachel!
L'Arachel: Hello! So it's true! Blessings do come in threes!
Eirika: L'Arachel, this place is dangerous. You should find safe haven elsewhere.
L'Arachel: Oh, you needn't worry about us. As you well know, my divine mission is to purge the land of these obscenities. I will show you the splendor that is L'Arachel in action! Bear witness!
Eirika: If you insist. At least let us join forces for the time being.

Riev: Heh heh heh. The young lady of Rausten... The more cruel and gruesome your death, the more that cur Mansel would weep, am I right? And that would make me so very, very happy.
L'Arachel: Do you think your words will frighten me? I am the princess L'Arachel! Slaying demons is my forte! You who have sold your soul to the soulless... I grant you release from your wretched existence.

“This will never do! I find it hard to say, but I must beg your leave...”
—Retreat Quote in The Sacred Stones.

“I, L'Arachel, strike in the name of righteousness, order, and Rausten!”
—Final Chapter Quote in The Sacred Stones

L'Arachel is illustrated in the trading card game Fire Emblem Cipher with the following cards: 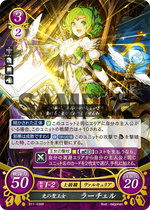 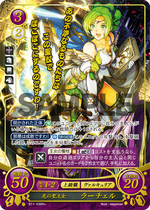 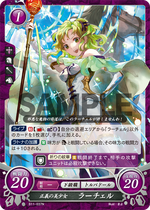 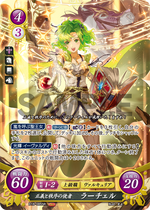 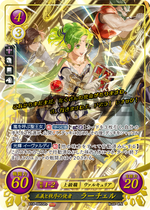 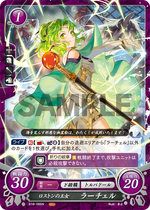