Edward Bosco
[view]
Líf is a character from Fire Emblem Heroes. A general of Hel, he shares a name with the first king of Askr.

Once the first king of Askr, Líf formed an alliance with the Divine Dragon Askr, and with the dragon's blood he gained the ability to open gates to other worlds. He is also the founder of the Aether Keep. According to Reyson in Chapter 3, Líf has the power to bound Heroes to contracts.

In reality, Líf is Alfonse from an alternative future, one that succumbed to the wrath of Hel. Desperate to end her terror, Askr and Embla joined forces to perform a ritual, The Heart's Rite, to combat Hel. While successful, the rite carried a huge cost. Every living being was sacrificed in exchange. Among the casualties included Kiran and Sharena, the latter's death weighed particularly heavy on his soul.

Full of regret and despair, Alfonse agreed to become a general of Hel, taking on the name of Líf to hide his original identity. Hel informed him if he balanced the cohort of the dead in a way that if someone from another realm is killed, someone from his own Askr would be revived, including Sharena.

In Book III, Chapter 1, Líf is resurrected as a General of Hel who attacks the Order of Heroes during Hel's invasion of Askr, set on destroying the world. After his defeat, he vanishes, as his descendant Alfonse explains to his sister Sharena that Líf is their ancestor. Líf appears in Chapter 4 for a rematch before Hel arrives to take Alfonse's life, but he does not say anything at all.

In Chapter 6, Líf appears before Alfonse a third time upon entering the realm of the dead, saying that death cannot be defied, and the living will never understand until they die. Afterwards, he retreats to meet up with Thrasir. The two fight against the Order of Heroes as a team, and flee they are defeated once again. Líf opens up a portal to another world for him and Thrasir to escape to, while the Askrans and the Order of Heroes follow them in pursuit.

Líf appears once more in chapter 8, as the Order of Heroes attempts to traverse an alternate Askr in the hopes of discovering a way to defeat Hel. He attempts to assassinate Alfonse but is stopped when Sharena intervenes.

As Alfonse researches this alternate Askr, specifically why no life can be found here, he discovers that the citizens of this Askr formed an alliance with Embla and defeated Hel, at the cost of the lives of everyone in this reality.

From this information, Alfonse comes to the conclusion that Líf is not, in fact, the first king of Askr reborn, but is instead the Alfonse from this ruined reality. He confronts Líf with all the clues he has gathered, and in turn, Líf seems angry and maybe even afraid after hearing it.

Though reluctant to answer at first, When confronted a second time in chapter 9, "Líf" reveals his past and motivations for joining Hel.

After defeating Thrasir, Alfonse deduces out that "Líf" will be at his version of the Order of Heroes' castle with the weapon the "forbidden heart" created, as he would do this if he was in "Líf" position. However, though "Líf" is defeated, he was counting on Alfonse to confront him in the castle, and sets up the collapse of the building as a back-up plan in order to guarantee that he at least takes down Alfonse.

Much to "Lif's" surprise, the Order of Heroes survives the collapse. Upon seeing Sharena rising from the rubble he acts more gentler to her as she reminds him of his sister's counterpart. When Alfonse and the rest emerge, "Lif" runs where the Order of Heroes chase him and confront him one last time. Eventually they manage to defeat him and he succumbs to his wounds. Before dying he makes peace with Sharena and tells Alfonse to make a better future than his. Later Alfonse confiscates "Lif's" Breidablik and gives it to Kiran believing they have the power to defeat Hel.

In Chapter 13, Hel reanimates "Lif" and "Thrasir", but only as empty husks which the Order of Heroes easily dispose of. Later in the afterlife after Hel's defeat, "Lif" wakes from a dream where he saw an alternate reality where the heroes triumphed over Hel and their future was saved. After explaining his dream to "Thrasir", "Lif" reasons that there could be countless alternate realms other than theirs and hopes that Alfonse will guide that future well.

In Xenologue 5, "Lif" and "Thrasir are approached by Thórr who offers an alliance to her, Loki and Alfaðör promising them to bring back their fallen realm. While "Thrasir" is convinced to join, "Lif" also joins but remains skeptical of Thórr, promising her that he will break free of the contract to prove that gods should never be so arrogant. In response, Thórr is impressed by the statement, saying that he has just shown the true strength of a warrior's spirit.

Following the end of Book IV, he and Thrasir arrive in the dream world, and approach Triandra and Plumeria. Lif offers to the two of them that the gods can grant their wish, presumably recruiting them just as Thórr did.
"End of spoilers. It's a pleasure doing business with you!"

Líf can be described as a man of few words, only speaking on rare occasions, such as his first appearance. Having been resurrected by Hel, he has turned into a cold-blooded killer set on destroying all worlds. However, Líf is not devoid of every single emotion. It's said that he placed flowers as an offering in front of a certain tomb, and he cannot bring himself to attack Sharena when she faces him. When Eir tells him something about her memories and what seems to be parts of his past, he urges her to tell Hel and have said memories erased, probably fearing the information that Eir may have.

It is later revealed that the reason he acts so disheartened is because of guilt over witnessing the deaths of everyone he ever cared about due to his own actions, with Sharena's death being the breaking point. As a result, he is so desperate that he did not hesitate to serve Hel in exchange to restore his Askr, even if it meant killing his alternate selves.

In Xenologue 5, Lif is revealed to be skeptical around mysterious figures like Thórr and Loki. While he does agree to their terms, he reveals he'll only do so in order to prove to the gods that they should not be so arrogant.

Lethal Swordsman
General of the realm of the dead. At his queen's command, this dark swordsman fights in hopes that all the living will join the ranks of the dead.

Líf is an Anima Mythic hero, making him a strong asset for defensive Aether Raids teams. On his own, Líf boasts a strong Atk at neutral 38 and has great mixed bulk, favoring his physical bulk by 5 points, but a mix of decent Spd and HP makes it tricky to deal with him at face value. Utilizing him is tricky as his kit comes with some powerful tools at his disposal, but there are some caveats that if mishandled can turn him quickly into a bane for his team.
Sökkvabekkr requires that at least one ally unit be within three spaces of him to activate its effect. Given the tight map size, this is relatively easy to achieve. Under this conditions, Líf gains an additional +4 to his four core stats during combat and can guaranteed make a follow-up attack. This makes him deceptively stronger and bulkier than he seems. However, after combat under this effect, the ally nearest him takes 20 non-lethal damage. Smart players can utilize this to activate certain skill thresholds on units using skills like Desperation, or boost the potency of a healing skill like Martyr, however, players also need to keep their units placement in this range as it can affect all allies if they all are at the same distance as irresponsible placements can wind up dealing 20 damage to all of his allies. This can be mitigated by having a Staff user on standby on his team or allies who have means of self-sustain and healing.
He has two powerful skills, one of which is exclusive to him and the other is limited to specific heroes. Deadly Balance deals an in-combat Atk/Def -5 debuff on his foe and accelerates his special cooldown per enemy attack on him if he is at at least 50% HP or has a【Penalty】at the start of combat. This combination makes it extremely easy for him to get his special active and further increases his damage output. Open the Future takes 50% of his Def as bonus true damage, meaning that he deals 17 neutral true damage, but also he recovers 25% of the damage dealt, giving him strong self-sustain.
Distant Counter allows Líf to counterattack ranged foes, reducing the types of units who can safely engage him and Time's Pulse accelerates his special cooldown in combat if his special is at maximum charge at the start of his turn.

Líf needs his allies within range to reap his weapon's full effect so dealing with his allies first takes away one of his strengths. At the same time, utilizing his weapon can also hurt his teammates in more ways that one, especially when using Dazzling Staff/Wrathful Staff units who can prevent his counterattack and then stack their combo's splash damage on top of Sökkvabekkr's ally recoil. Otherwise, Líf is generally dealt with easily through high bulk Blue units like Brave Hector, Legendary Chrom, and Fallen Hardin. Unless he runs Vantage, nuking mages like Ophelia can also deal with him in a single attack after their AoE damage.

Inheriting Reposition is basically all Líf needs to succeed as it can pull an ally out of lethal danger and still keep them in the range to reap Sökkvabekkr's effects. Otherwise Líf's starting kit is perfectly tailored to make the most of his effects and any sort of changes are up to the player depending on what they wish to accomplish as his stat spread is flexible enough to be run any way they please.

Líf is illustrated in the trading card game Fire Emblem Cipher with the following cards: 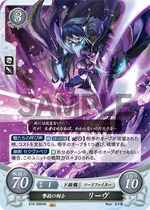 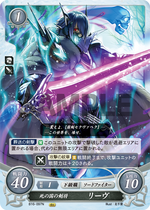 Líf is Old Norse for "life" and "life of the body". Líf was said to be one of two humans who would survive the events of Ragnarok and repopulate the world with Lífþrasir.