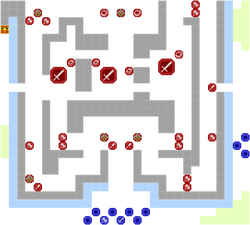 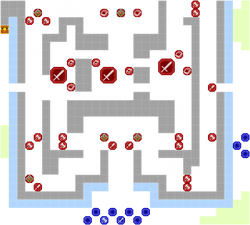 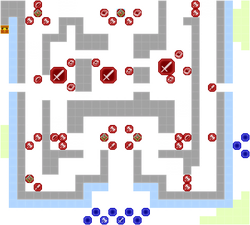 Chapter script
[view]
“With razor-sharp focus on the unification of Fódlan, Edelgard feigns a premature assault on Fhirdiad while the Black Eagle Strike Force instead descends on the southern stronghold of Arianrhod.”
—Chapter description

Lady of Deceit is the sixteenth chapter of the Crimson Flower route in Fire Emblem: Three Houses. This chapter takes place at Arianrhod, and contains the mission The Siege of Arianrhod.

Edelgard and Hubert reveal to Byleth that while the general army is under the impression that they will immediately invade Fhirdiad, the Black Eagle Strike Force will launch a secret attack on Arianrhod as a preliminary step.

At the end of the month, the Adrestians make for Arianrhod, much to its commander Cornelia's shock; she concludes that they are coming after her personally rather than the fort. She deploys mechanical weapons called Titanus to stop the Adrestians and even kill some of her own Faerghus troops.

If Felix was recruited and battles Rodrigue, he will express shock disgust at Felix for betraying his family and he says that he would no longer serve Dimitri. If Felix battles Ingrid if she was not recruited, she will say that he had betrayed Dimitri, Glenn, and Lord Rodrigue and just about everyone, but Felix says that they couldn't possibly understand. If Felix was not recruited and Ingrid; if she was recruited, battles him he expresses anger of the fact that Ingrid talked about loyality but in the end betrayed her homeland, but Ingrid said she betrayed lord and family alike because she believes in Byleth and fights for what she believes in.

The Adrestians defeat Cornelia, who ominously proclaims that what has just transpired is all part of her script before expiring, which is a gross mistranslation of the original japanese scrip where she remarks on how thouroughly Edelgard managed to manipulate her and Those Who Slither in the Dark. With the total unification of Fódlan in reach, Edelgard announces that the Black Eagle Strike Force will lead all of Adrestia's military might to Fhirdiad.

When the group returns to Garreg Mach Monastery, they find Lord Arundel waiting for them. Arundel explains that he has concluded his business in the former Alliance territories and wanted to drop in on his niece. He further reveals that Cornelia was planning to betray the Kingdom, but that Edelgard's forces killed her before she could get the chance. Arundel chides Edelgard for her imprudence, but she remains confident. Arundel ominously warns her that the Empire may become another Arianrhod before taking his leave. Hubert arrives and reveals that pillars of light have disintegrated Arianrhod, House Rowe has been wiped out at last, and approximately a third of the Imperial occupation force is unaccounted for, and Edelgard presumes this to be Arundel's work. Hubert explains legend has it that Ailell, the Valley of Torment, was destroyed under similar circumstances, and connects it to the current incident and figures that Those Who Slither in the Dark were responsible. The group decides that this piece of information should not reach their allies lest it affects morale and thus scapegoats the Church of Seiros for the incident and makes plans to invade Fhirdiad by the end of next month.

There aren't any reinforcements on this map, so there's no rush. Feel free to slowly bait enemies one at a time by plinking them with Curved Shot then retreating, or putting one tank in their threat range. Additionally, there's not really much advantage to pulling the levers; the trap floors impede enemy mobility as well, and make it easier for long-range mages and archers to shoot down Kingdom forces on the other side safely. Don't feel obligated to have your right-side 3 units actually charge in to the fortress; they can also head south and join up with your main team if you'd prefer to keep your forces concentrated.

The most threatening turns are arguably the first two, where Felix and Rodrigue and their allies will come charging out of the gate at you. Rodrigue packs mixed damage off both Aura and a Silver Lance, so be careful who you leave in his impressive threat range; squishy mages like Linhardt will just be impaled by his Silver Lance. For Felix and the Fortress Knights, magic damage is recommended; if you can't finish them quickly enough, Bernadetta's Encloser will freeze them in place so that you can avoid eating their impressive offense. Gwendal can be baited by sticking a unit in range of his Pegasus Knight; then destroyed by any sort of magic damage. Ingrid is scary, with 52+6 speed on initiation in Maddening mode thanks to Darting Blow; the Impregnable Wall gambit is, as usual, the safest way to bait her forward. You can also set up for a lethal bow counter OHKO if you have a strong enough archer. Cornelia won't move, so you can plink her to death with Curved Shots or other long-range Bow combat arts until you have a fatal attack ready.

Be sure to fully shield break at least one of the Titanus's if you've been using Edelgard's Raging Storm. They drop the extremely rare Agarthium, which is needed to repair Aymr, Edelgard's axe.