25
[view]
“A mighty sword that only women can wield.”
—In-game description from New Mystery of the Emblem.

The Ladyblade is a Sword that debuted in Fire Emblem: Mystery of the Emblem.

In Echoes: Shadows of Valentia, anyone can wield it, but its might is doubled when used by a female character.

In the spin-off title Fire Emblem Warriors, the Ladyblade retains its Japanese name and acts as the personal weapon of Celica. Celica is recruited from the eponymous boss stage on the History Mode map "Together to the End" and the Ladyblade is that stage's S-Rank Clear reward. However, if the player does not get an S Rank Clear, Celica comes equipped with a Bronze Sword instead. Like the other weapons, the Ladyblade's Might can be raised by creating Mastery and Sanctuary Crests, with this weapon's Opus being found in the Shadow Dragon DLC Pack.

Official artwork of the Ladyblade from the TCG.

The Lady Sword as it appears in the fifth series of the TCG. 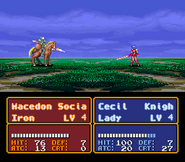