Sarah Anne Williams
[view]
“I am the blade—the blade my father wields. I will do as I am ordered.”
—Laevatein

Laevatein is an antagonist from Fire Emblem Heroes. She is a princess from the Kingdom of Múspell, Surtr's daughter and Laegjarn's younger sister. She is seen fighting Alfonse in the opening cinematic.

One of the generals of Múspell, the Order of Heroes first encounters her in Chapter 2 of Book 2, fighting alongside her father and Loki. Encountering the Order several times, Surtr eventually orders Laevatein to track and kill them.

In Chapter 5, Laevatein tracks them down, and stating her orders, she fights them. When defeated, Laevatein follows her sister's previous instructions and retreats from the battle. During her escape, she encounters Laegjarn and tells her she's received orders from their father, but appears to grow concerned when her sister expresses unhappiness over the upcoming battles. Nevertheless, she join forces with her, and after the battle with the order, when Laegjarn wonders aloud what to do, Laevatein states that she will set herself ablaze, causing Laegjarn to immediately reject the idea, telling her the flames of Múspell are dangerous and making Laevatein promise she never resort to it, which she agrees, but worries over their failure, asking what they should do. Prompting Laegjarn to ask Laevatein in helping her think of a plan.

In Chapter 6, when Laegjarn and Laevatein are lured to a trap by Alfonse and Fjorm, Laevatein panickedly reports that the enemy is coming to their closed off position, causing Laegjarn to instruct Laevatein to escape by herself while Laegjarn keeps them busy. While Laevatein objects, despite Laegjarn's attempts to assure her, Laegjarn tells her it's an order, and Laevatein reluctantly does as she's told, escaping undetected.

In Chapter 13, she is injured by Surtr as punishment for failing to defeat the Order and is almost used as a sacrifice for the Rite of Flames before Laegjarn intervenes and takes her place. She then faces the Order once more as retaliation for Laegjarn's death, and nearly goes through with using the Rite of Flames, but relents when Fjorm reveals that her sister's last wish was for Laevatein to live. In the aftermath, she assumes leadership of Múspell.

Not one to express herself often, Laevatein maintains a lack of individuality, doing whatever she is told without hesitation. And while she does show a bit more emotion at times, she remains hesitant to think for herself and largely relies on others. As a result, she has the mindset of a common soldier, having a very impersonal relationship with her father, adressing him as "Sir" or "Lord". This also applies to her foes, as though her pursuit of the Order of Heroes is unwavering, she does not appear to have any personal feelings on the matter, simply telling those are her orders when confronted by them.

Her relationship with her sister however shows a much softer side, with Laevatein seemingly much happier in her sister's presence, but also more distressed by failure. However, it leads Laegjarn to often rein her in, as she is arguably the one person she'll listen to reason, which otherwise, wouldn't restrain her recklessness.

Searing Steel
The second princess of Múspell, the Kingdom of Flame. She sees herself and the blade she wields as one and the same, and keeps her emotions in check.

Laevatein is one of many Sword Infantry units in Heroes and statwise is near identical to many of the top tier units like her. However, she packs a unique weapon seen only in tomes prior, her eponymous sword Laevatein, increasing her damage output based on the stats on her, similar to blade tomes. This is a critical blessing to Laevatein as she can dish out incredible damage when buffed, especially on her already strong Atk and decent Spd. However, it does make her reliant on buffs in order to do accomplish her feats.

She has Swap for supportive unit movement, though there are better options for her. Fury further increases her stats while damaging her afterwards. Attack Defense Link gives her +6 to Atk/Def to her ally and herself is she uses a Support skill on an ally, giving her the means to self buff herself. Finally Odd Speed Wave increases her Spd by 6 as well as her allies adjacent to her at the start of odd numbered turns, granting her further means to self buff.

Laevatein is a force of nature when properly supported and buffed, but the huge margin between her highs and lows makes her somewhat inconsistent, buts still a worthy unit to use when handled correctly.

Laevatein hits incredibly hard, however bulky blues like Effie, Hardin, and Brave Hector can endure her hits and hit harder on retaliation. Her low resistance makes her weak to many magic users including Lilina, Celica, Reinhardt, Ishtar, and Ophelia. Finally, she is extremely vulnerable to Panic Ploy as she definitely does not have the same level of HP as many users of the skill does, severely crippling her damage and making her weapon useless.

With Laevatein's effect, Glimmer is a must since she is reliant on her buffs for damage. Laevatein does have semi decent speed, but likely against most top tier units, she will only get one attack in unless she is running Swordbreaker. Death Blow can empower her initiated attacks while Special Spiral helps to keep her special active to abuse Glimmer to maximum efficiency. Replacing Odd Speed Wave with Odd Attack Wave serves to maximize her buffs as possible.

Kumade Warrior
The second princess of Múspell, the Kingdom of Flame. She keeps her emotions in check but can't relax without her blade by her side.

The second princess of Múspell, the Kingdom of Flame. She's begun to practice swimming.

The younger princess of Múspell, joining in on the ninja festivities and donning ninja garb to help her sister.

Laevatein is illustrated in the trading card game Fire Emblem Cipher with the following cards: 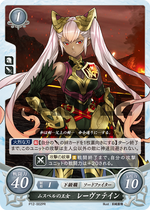 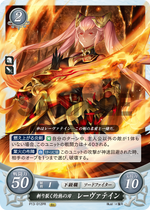 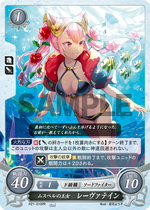 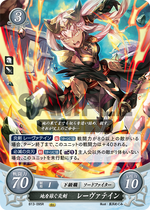 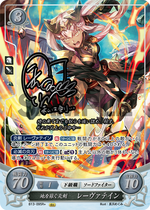 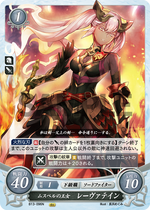 In Norse mythology, Lævatein is a weapon mentioned in the Poetic Edda poem Fjölsvinnsmál.