The Laguz Lance (ラグズランス Ragusu ransu) is a special Lance that appears exclusively in Fire Emblem: Path of Radiance. Like its name suggests, this lance is one that is imbued with the special property of inflicting effective damage against Laguz units.

The Laguz Lance can be perceived to be the predecessor of the Beast Killer, a lance featured in Awakening that indiscriminately inflicts effective damage against both Taguel and other beast-based units alike. 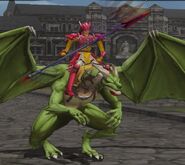