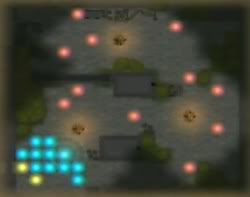 Chapter script
[view]
“The Laguz Alliance sacks Flaguerre with ease and sets off immediately for Mugill. The fortresses of Flaguerre and Mugill are both key to the defense of western Begnion and have figured for many years in the military plans of Gallia, Crimea, and Daein. The fortress of Mugill is well defended by thick walls and countless blades. However, the Laguz Alliance knows that, if they are to win this war, Mugill must fall. Ike and his companions march on, though thoughts of the medallion and the dark god entombed within fill their hearts with dread.”
—Opening Narration

Laguz and Beorc (ラグズとベオク Raguzu to Beoku) is the first chapter of Part 3 in Fire Emblem: Radiant Dawn. If either Lethe or Lyre are defeated in this chapter they will still be able to be used later on.

At the end of turn 4: 1 Axe General, 1 Lance General, and 1 Fire Sage at the northwest entrance

At the end of turn 5: 2 Halberdiers at the start point.

At the end of turn 6: 1 Warrior, 1 Swordmaster and 1 Sniper at the starting point.