Chapter 3: Lionheart Eldigan
[view]
“You, as a descendant of the Wind Crusader, must guide the world onto the proper path. ... Lewyn, please remember the Wind Crusader flows like a cool breeze guiding all living beings to the path of peace. His way is never to be confused with violence.”
—Lahna to Lewyn when giving him the Forseti tome

Lahna is Lewyn's mother and the Queen of Silesse. Although she rules after her husband's death, she wishes Lewyn to assume the throne because he is the heir of Forseti's bloodline. She sends Erinys and her squad of pegasus knights south to find him when he runs away.

After Sigurd is declared a traitor by Grannvale, Lahna offers him and his group shelter in Silesse. She sends numerous petitions on Sigurd's behalf, none of which are accepted. She sympathizes with him and counsels him to maintain hope and to not let himself give into anger. She acts as a mother figure and considers him to be a responsible influence on Lewyn, whom she spurns in anger for his flight from home two years before.

In chapter 4 of Genealogy of the Holy War, her brothers-in-law, Daccar and Myos, rebel against her in an attempt to seize the throne. She is briefly held prisoner when Silesse Castle is captured but gives the townsfolk a chance to escape before the castle is taken over, and they are rescued from Daccar's forces by Sigurd's army. She is deeply grieved by Annand's death in battle.

When Silesse is recaptured, Lahna has an emotional reunion with Lewyn. She forgives him for his transgressions and bestows on him the Forseti Tome, along with some words of wisdom about Forseti's way.

Sometime after the Battle of Belhalla, Lahna passes away of unknown causes. Erinys is crowned queen in her place.

Lahna's portrait in Genealogy of the Holy War. 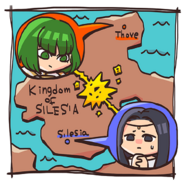 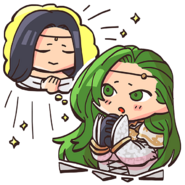