Priest
[view]
“Nuns can fight too, you know. I feel just as strongly about this as Larcei does. The imperial troops are becoming crueler with each passing day. It's dangerous just to be a girl anymore! But I don't plan to go down without a fight. I have my own means of warfare!”
—Lana to Seliph in Chapter 6

Lana is a playable character from Fire Emblem: Genealogy of the Holy War. Lana is a noble of Grannvale's House Yngvi and a bearer of minor Crusader Ullr blood. She is one of the grandaughters of Ring and is the daughter of Edain. She is also the niece of Brigid and Andrey. She is the younger sister of Lester and a cousin of Febail, Patty and Scipio.

Her substitute character is Muirne.

Along with Lester and several of the other initial members of the Liberation Army, Lana was raised by Edain, Shannan, and Oifey in an orphanage located in Tirnanog. It is mentioned in her lover conversation with Seliph in the Final Chapter that she spent a lot of time with him when they were children. When King Danann's army attacks Tirnanog, Lana decides to join the fight, despite Seliph's protests out of concern for her safety. From this point on, she serves as a healer for the Liberation Army.

If she is not paired up during the course of the game, she will become depressed in the ending because Seliph never noticed her romantic feelings for him. However, she also never tells him about them.

Lana is a very friendly and sweet young lady, much like her mother. She is selfless and seems to have low self-confidence, as shown by her thoughts that she is unworthy of Seliph's love if they are paired up. She is one of the first people to approach and befriend Julia when she first joins the army, expressing concern for her well-being and gifting her with a Mend Staff.

Being a Priest, Lana's role in the Second Generation is primarily that of a healer until she promotes at Level 20. Even then, if she does not inherit good skills from her father (as her mother possesses no skills), she will not be a very competent combatant. She faces a significant issue in that the player will have to favor one of Edain's children over the other, and many people prefer to favor Lester over Lana since he is far easier to screw up with the wrong inheritance.

Despite her combat and inheritance issues, Lana's main advantage is that she will always wind up being a good healer and staff user, regardless of the identity of her father. She will easily be able to inherit a bevy of useful staves from her mother right from the start, which can include Return, Warp, and Physic, allowing her to fulfill her role well, all while gaining EXP at a reasonable rate. The only actual downside is that her Resistance will be rather low if her father is not Claud.

In Chapter 6, Lana may speak to Julia, whereupon Julia will gain the Mend Staff.

In Chapter 6, after Sophara Castle is captured, Seliph may speak to Lana, and she will gain three points of HP and 100 love points with Seliph.

In Chapter 7, after Darna Castle is captured, if Finn is Lana's father, he can speak to her, whereupon she will gain five points of magic.

In Chapter 10, if neither Febail nor Lana has a lover, he can speak to her, and Lana will gain three points of HP and 100 love points with him.

In the Final Chapter, after Dozel Castle is captured, if Lana's lover is Seliph, Scáthach or Febail, she can speak to her lover, and he will gain three points of resistance.

Lana is illustrated in the trading card game with the following cards: 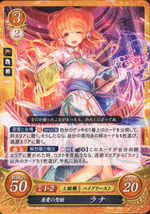 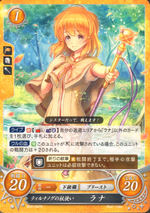 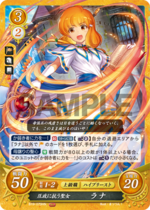 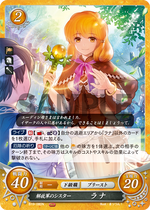 Lana is a feminine given name that is short for Alana (in English) and Svetlana (in Russian).