Cavalier
[view]
“Of course I'll watch. We can all learn from one another. Don't expect me to lower myself to your level, though.”
—Lance talking to Alen in a support conversation.

Lance is a playable character from Fire Emblem: The Binding Blade. He is a knight in service to House Pherae who travels with Roy to take back the lands annexed by Bern. Of the two Pheraean cavaliers, he is more intellectual and calm; it is revealed in support conversations with Wolt that he actually records down the circumstances of every battle the Lycian Alliance Army has been involved in so that he can identify and learn from any flaws in the battle plan. He looks up to Marcus and is a great friend of Alen; his characteristics compared with Alen also shows on their stats: Lance has more speed and skill while Alen has more Strength and Luck. Lance is not a native of Pherae.

Contrasting the hotheaded Alen, Lance is perceptive, fairly bookish, and calm under fire. He is a great fan of literature and military tactics, often allowing others to borrow books or quoting military leaders. He is fairly decent at chess, being able to beat Lot reliably, though he suggests this may be due to his own training. Lance is extremely stringent about his duties as a knight, and takes them very seriously, though he is rarely overbearing about it in the same manner as Marcus, preferring to simply hold himself to the code. As a result of his nature, he is also a very humble sort, seeing himself as an outsider at the court of Pherae and therefore the most expendable member. He tends to treat people who view him with kindness and respect with some level of surprise.

Lance has decent growths in HP, Skill, and Speed. Average Strength and Luck and low defensive and resistance growths. Lance usually ends up being one of your more accurate units and is quick to double thanks to his high bases in both Skill and Speed. Out of your two early game Cavaliers, Lance will usually have higher Skill and Speed than Alen while only being slightly weaker. In Hard Mode, he has trouble dealing a lot of damage early game, but his speed usually makes up for it as he will be one of your first units to double. Using him and Alen is not a bad idea as they compliment each other well early on.

Lance contributes decently early game as his Skill and Speed bases allow him to start doubling enemies soon after his first few levels. He provides good damage once his Strength starts picking up and can easily finish off foes who cannot be doubled by Alen or killed by Marcus (Because he is far away?), although such enemies are very rare. Having both Swords and Lances allows him to be able to deal with most enemies in the early game well enough. During the mid-game Lance continues to be fast and accurate meaning he can take advantage of Axes upon promoting to Paladin. Axes have high Mt compared to Swords and Lances and their only downside is their low accuracy and high Weight. Lance offputs both of these issues by being relative accurate and fast. Though he does only start with E Rank Axes. Making it difficult to use higher end Axes by the end of the game. The Paladin promotion also grants him +2 Strength and Defense notably as these stats can be shaky with only a 40% Strength growth and 20% Defense growth and the +1 to Swords and Lances are very welcome to let Lance start using Killer weapons too which help his low damage.

Nearing the end of the game, Lance will be interested in using Durandal as it gives a +5 Strength which can fix his somewhat low Strength stat. Being a Paladin allows Lance to be able to move well in the larger end-game maps letting him contribute more to the fights and with his accuracy being decent will be comfortable using Javelins and Hand Axes reliably. Moreso than Alen. Having Axes, Lances, and Swords helps him pick and choose what groups of enemies he will help take out as well giving him a lot of utility similar to Alen.

“Lord Roy, Lord Eliwood... Thank you for everything!”
—Lance in the final chapter.

“Lord Roy... I wish you luck...”
—Lance's death quote in The Binding Blade

Lance - Tranquil Knight (静かなる騎士 Shizukanaru kishi)
"Upon returning to Pherae with Roy, Lance proceeded to help his master rebuild the trampled land. Never losing his cool, he would directly confront Roy if he was making a mistake, and he played a major role in leading Pherae to peace again."

He plays an important role in the Kruzard arc of the Hasha no Tsurugi manga which occurs between Chapters 9 and 12. During this arc, he has been temporarily separated from Roy's group to help protect Eliwood while he reforms the Lycian Alliance. He is also fighting because the main "villain" of the arc, Kruzard, was once a good friend of his. He then appears again in Chapters 17 and 18.

Lance is illustrated in the trading card game Fire Emblem Cipher with the following cards: 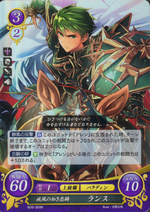 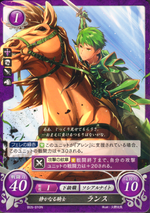 Lance as a Paladin in Fire Emblem 0 (Cipher).

Lance as a Cavalier in Fire Emblem 0 (Cipher).

Lance's portrait in The Binding Blade.

Lance's appearance in Hasha no Tsurugi.

Lance as a Cavalier holding a sword in The Binding Blade.

Lance as a Cavalier holding a lance in The Binding Blade.