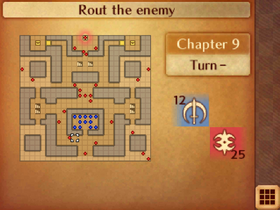 Hinata, Oboro (Appears as NPCs on Turn 3, speak with Corrin to recruit)

Chapter script
[view]
“Smoothing over relations with Fuga and the Wind Tribe. Corrin and company continue on their rescue mission toward the Kingdom of Izumo.”
—Opening Narration

Land of Gods (神々の坐す国 Kamigami no imasu Kuni lit. The Country where exist the Gods in the Japanese Version) is Chapter 9 of Fire Emblem Fates in the Birthright Version. This chapter takes place in Izumo: Castle Interior.

Oboro and Hinata will appear to the southwest of the map, at the end of the second turn. Corrin must talk to each of them separately to get them to join in. That should be easy since they'll move towards Corrin, and even easier if the enemies within range are already cleared. In the 8th turn some Cavaliers will show up via the eastern stairs, and in the following one they'll be joined by some Mages coming from the west. The reinforcements will alternate between Cavaliers and Mages until turn 13.

There are four Dragon Veins under the trees of Izana's palace, which can be triggered to heal Corrin and their allies.

Alternatively, Saizo and Kaze can be taken to the top left and top right corners of the room where the player and their crew are at the start, paired with characters that will give them defensive boost. This will bait the nearby Mages and Outlaws into attacking them, who will be able to attack them during enemy phase thanks to their Shurikens. Reposition Kaze and Saizo along the edges of the room to clear out all of the Mages and Outlaws within range.