Land of Sorrow (Shadow Dragon and the Blade of Light)

Chapter script
[view]
“Gra's betrayal of Altea years earlier had come as a shock, of course, until that day they attack Marth's kingdom in the name of Dolhr, Gra had been a trustworthy neighbor and ally. While the Altean army was out on an expedition, Gra struck from the rear, annihilating the Altean soldiers, killing Marth's father, King Cornelius and stealing Falchion, the blade of light. It was a crushing blow. Much time had passed since that sad day, and much had changed. Now it was Marth's turn to descend on Gra Bastion, and face King Jiol, the man who had robbed him of his father.”
—Opening Narration

Land of Sorrow is Chapter 14 of Fire Emblem: Shadow Dragon and the Blade of Light and its remake.

This chapter is not too difficult, but it is not the easiest that you have done. Make sure one of your units has a door key to open the door around the armory and vendor, and after that, have your thief raise the bridge, and send Marth to the northwest village, while your thief goes toward the southeast chests with an escort or two to clear out the enemies. Meanwhile, have your ballistician(s) fire on the enemies centered in the northwest fortress, especially the healers, and move most of your forces toward the door that will lead to Jiol. Palla and Catria will fly toward Marth to be recruited, but make sure they will not be vulnerable to archers where they are recruited, as one of them holds a Longbow. Flying reinforcements will come from where the two appeared, so be ready. Afterward, have your forces pull together and go toward the boss. Defeat the knights and the lone curate, and once everything else is taken care of, defeat Jiol and seize the throne. Weapons strong against knights as well as magic will make short work of him. 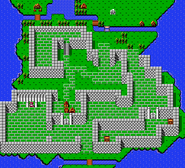