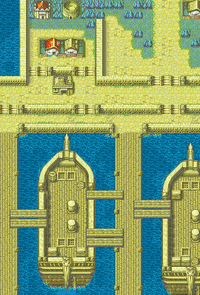 Landing at Taizel is Chapter 12 of Fire Emblem: The Sacred Stones when playing Ephraim's route. This chapter contains an Arena.

You begin in the ship in the middle of the map. There are a few enemy units around along with Caellach, though you won't be able to fight him yet. Once the Cyclops appears, you'll be facing Grado forces and monsters. Both enemies will not attack each other, so you will have a hard time to defeat your foes if you're unprepared, even moreso since you go directly into this chapter after the previous one, so no Tower of Valni training in between.

Unlike Phantom Ship, this map allows you to stay at where you start and hold out all the enemies that run to attack you with no penalties at all. Do so if your units are weak or unprepared, though if you're playing for a low turn count, it would be wise to rush foward.

As for enemies, there are both a variety of ranged and melee enemy units, including some Shamans, Mages, Javelin-Cavaliers, Fighters, Pirates, and Mercenaries. If you deploy many lance-users, watch for the Cavalier coming from the left side as it has a Lancereaver. A Mercenary on the middle-right side of the map has a Killing Edge and an Archer on the stairs right before the Cyclops has a Killer Bow, so watch for those also. There is also a Mage on the left side equipped with a droppable Elfire Tome and a Shaman beside the Cyclops carrying a droppable Guiding Ring.

Run to the houses to gain a few items and Ewan, a Pupil and a unit required to recruit Marisa.

Once you obtain Ewan, send him up to talk to Marisa. Marisa is guarded by a few units and will attack like a normal enemy unit so it is best to bait her a unit with either no items, a bow, or best of all, a unit with enough defense to take no damage from Marisa with no weapons.

The Cyclops will not move from its spot. Even though it uses axes, the Cyclops is carrying a Swordslayer, so caution is advised since it will most likely one-hit any sword user it faces. It also carries a Hand Axe. Try to manipulate the Cyclops into using its Hand Axe before killing it, so that you can grab its Swordslayer.