Thief
[view]
“So you're driving me away again. I thought you liked me when I was dancing. You were watching me so intently...”
—Lara, in a conversation with Perne

Lara is a playable character from Fire Emblem: Thracia 776. She is a thief and a member of the Magi Squad.

During her childhood, Lara was sold into slavery to a traveling troupe of entertainers, who employed her as a dancer. Eventually, Perne saved her, and she was happy to dance for him. However, Perne later learned that Lara was still a child, and due to his embarrassment about intently watching a child dance, he dismissed her.

Lara first appears in Chapter 4, where, under orders from Ced, she, along with Brighton and Machyua, breaks into the Munster dungeons to rescue Leif after the prince is captured by Raydrik.

When Leif's army later passes through Dakia Forest and defeats Colho and Salem in Chapter 12, they discover the hideout of Perne's gang of bandits.

If Lara is chosen to infiltrate the hideout in Chapter 12x, the chapter will open on her informing Leif that Perne is not a bad person, explaining her history to him. She then urges Leif to let her speak to Perne, and if she does so, she will convince Perne to join Leif's army. At the same time, she will decide to take up dancing again.

Lara then goes on to continue supporting Leif in his cause to liberate Northern Thracia from the Grannvale Empire. She will return to work as a dancer thereafter, performing in various cities across Thracia. Lara's performances are said to give her audience courage, and she is thus regarded as a symbol of Thracia's reconstruction.

After the war ends, Lara returns to being a dancer. It is stated that her elegant yet powerful dancing became a symbol of Thracia's reconstruction.

Despite her rough childhood, Lara maintains a bubbly, cheerful personality regardless, and this emerges most prominently through her dances, which she performs with vigour. She is also known to be a courageous person, as can be seen from her decision to join the Magi Squad and help break Leif out of jail.

Lara is also portrayed as a sentimental person. This surfaces through her conversation with Perne in Chapter 12x, where, despite having been driven off by him, she admits that she misses him, wanting to dance again for the person who had saved her from slavery.

Lara joins as your second thief, and while she is useful for opening doors and stealing items, she cannot steal most weapons or fight well. She is better off without a sword, acting as capture bait to weaken enemies.

In Chapter 12x, Lara can talk to Perne and class change into a Dancer, letting her refresh other units and allow them to act twice in a single turn, making her an invaluable asset for the rest of the game. As a plus, she still retains her ability to open doors and chests with Lockpicks.

Due to her awful durability, the player should keep her out of long-range attacks such as ballistae.

“Yes...Until a year ago, I was a dancer in a band of traveling entertainers. I hated it there, but because I was sold there for money when I was little, I couldn't escape. But then Perne saved me from them.”
—Lara

Ced: Brighton, I want you to rescue the people trapped in the dungeon level. I will go search for the children with Asvel.
Brighton: Yes. We will go to your aid once we release the people here.
Ced: Very well, then we shall meet again. Good luck!
Machyua: Lara, you're our only hope. Will you be all right?
Lara: Yeah, leave the lockpicking to me. But make sure you protect me, all right?
Brighton: If someone attacks you, just take his weapons. You can do that much.
Lara: Well, that's easier said than done. I can't carry heavy weapons like you can.
Machyua: Don't worry, Lara. Brighton and I will protect you. Let's go!

Lara: Excuse me...
Leif: Lara? What's wrong?
Lara: Perne isn't a bad man.
Leif: Do you know him?
Lara: Yes... Until a year ago, I was a dancer in a band of traveling entertainers. I hated it there, but since I was sold there for money when I was little, I couldn't escape... But then Perne saved me from them.
Leif: I see... So that's why you became a thief.
Lara: Lord Leif, please let me speak with him. I need to talk to him!

Lara: Perne!
Perne: Hm? Oh, Lara... What are you doing here? Ah, I get it... You missed me so much, you just had to come back, right?
Lara: ...What if I said yes?
Perne: Whoa, whoa, what's with the serious look? I was joking. I don't need a kid like you hovering around me. Go back to Munster.
Lara: So you're driving me away again. I thought you liked me when I was dancing. You were watching me so intently...
Perne: Yeah, I didn't know you were still a kid back then. Yup, you're right, I liked your dancing. It's, you know...energizing. It cheers you up. But you hated dancing, right? That's why you quit.
Lara: ...No... I actually like to dance. So... If you liked it, I can dance for you again.
Perne: What are you saying...
Lara: No, not just for you... If I can cheer everyone up with my dancing, then that would be nice...
Perne: Everyone? Who's everyone?
Lara: Prince Leif's Liberation Army. I'm helping them. I'm not much use, though...
Perne: Hmm... Ah, I get it... All right Lara, go back to being a dancer. Then I'll join the Liberation Army as well.
Lara: Really, Perne? Do you really mean it?
Perne: Yeah, I can't be a thief forever. The liberation of Northern Thracia, huh... Sounds interesting.

"Resuming her original trade of being a dancer, Lara went on to perform throughout Thracia. Her captivating dance, known to rejuvenate the audience's spirits, soon became a symbol of Thracia's own revival. Many people were themselves inspired by her artful, vivacious performances."

Lara is illustrated in the trading card game with the following cards: 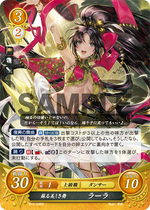 Artwork of Lara in Fire Emblem 0 (Cipher) by Sencha.

Lara as she appears in the TCG as a Level 10 Thief.

Lara as she appears in the TCG as a Level 10 Dancer.

Lara as a Dancer in Fire Emblem 0 (Cipher).