Myrmidon (Genealogy of the Holy War)

Lizzie Freeman
[view]
“Ulster, what're you so freaked out about? We knew they'd catch on to us sooner or later. Let 'em come! At least we don't have to waste our time going to them. We can confront the enemy and make an advance on Ganeishire all in one shot.”
—Larcei in Genealogy of the Holy War

Larcei is a playable character from Fire Emblem: Genealogy of the Holy War. She is the daughter of Ayra and the twin sister of Ulster.

After Seliph's army defeats the Grannvale Empire, Larcei will follow her lover to the destination of his choice. If she does not have a lover, Larcei will return to Isaach instead. She may ascend the throne, provided that both Shannan and Ulster have fallen in battle. Her substitute character is Creidne.

Taking after her mother, Larcei is a slightly hot-headed person, who is prone to hyperactive-like tendencies at times. She harbors feelings for Shannan, whom she looks up to, both as a mentor and a caregiver. Iuchar and Iucharba, sons of Danann, also have crushes on her, and either one may join Seliph's army, depending on who Larcei persuades first.

Another point to note is that Larcei is among the few who believe Ayra is still alive after the Battle of Belhalla. A conversation she shares with her brother has her heatedly chastising him when he openly doubts the possibility of his mother's survival, swearing to locate her once the war ends.

Regardless of her parentage, Larcei has the capability of becoming a phenomenal threat to any unit that moves within her range. She automatically comes with three useful skills, gains a fourth on promotion, and can easily come equipped with a Brave Sword with a very high kill count. Depending on her father, she could well start off with Paragon (Lex), Luna (Chulainn), Critical (Naoise), Sol (Dew), or a handful of other useful skills. With high maximum stats and good promotion gains, she will easily achieve high stats across the board, aside from magic. With such an overwhelming number of advantages, she will almost never fail to clear every Arena battle in each map.

Between her incredible loadout of stats, skills, and gear, there are some limitations: her mediocre movement, lack of access to legendary weapons, and near total lack of access to ranged weapons. She faces tremendous competition from the rest of the generation 2 units, namely those who wield legendary weapons. Shannan in particular fulfills a very similar niche to her, but comes armed with the Balmung.

This is not to say that she is a bad unit, as she is generally one of the better second generation units, but she has her limitations Should the player not wish to expend legendary weapon uses or plow through maps at fullspeed, Larcei will always be there to cut whoever crosses her path into shreds.

In Chapter 6, Ulster may speak to Larcei, and she will gain one point of luck.

In Chapter 6, Larcei may speak to either Iucharba or Iuchar to recruit either one of them.

In Chapter 7, Larcei may speak to Shannan, and she will gain two points of strength, and 100 love points with him.

In Chapter 7, after Darna Castle is captured, if Finn is Larcei's father, he may speak to her, and she will gain five points of skill.

In the Final Chapter, after Dozel Castle has been captured, Larcei may speak to her lover if he is either Seliph, Iuchar, Iucharba, or Shannan. He will gain three points of strength as a result.

Larcei is illustrated in the trading card game with the following cards: 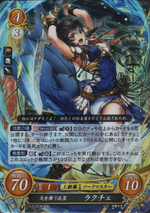 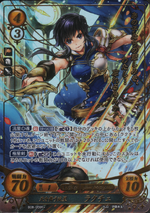 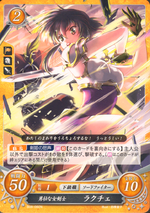 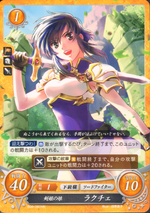 Larcei's Japanese name in katakana can also be rendered as Luchtaine, a deity of art in Irish mythology. He is known to have forged the weapons used to battle the Fomorians. The change to Larcei's name in English can likely be attributed to the fact that Luchtaine is a male deity.