Chapter 10A: The Resistance Forces or Chapter 12: The True Enemy (Joins in Chapter 11A: The Hero of the Western Isles)

Elizabeth Simmons
[view]
“Okay, now let me cheer you up with my latest dance!”
—Larum to Douglas in a support conversation

Larum is a playable character from Fire Emblem: The Binding Blade. She is a dancer and a member of the resistance forces against the Etrurian government. She is also the adopted daughter of Etruria's Great General, Douglas, as well as a potential love interest of Roy. If Elffin is recruited instead, she takes the role of the character who manages the Auguries.

She makes a brief cameo appearance in chapter 17 of the Hasha no Tsurugi manga.

Originally part of a group that was to be a mediator with Elffin, they came to participating in espionage against the enemy in order to return a favor to the Resistance that saved them.

A particularly boisterous and loud person, Larum tends to act very childish at times and scream and yell at inopportune times. She also has a huge crush on Roy, which she states on a regular basis. The only two people that tend to take Larum seriously are Douglas and Ogier, in which Larum responds by trying to impress her father and teasing Ogier, causing both to humour her actions in their own way.

Larum also often seems to be somewhat detached from reality, as she does not take much consideration into what she says or does and often daydreams out loud or acts out something she wishes would happen, as her B Support with Geese sees her acting out a fantasy she has of Roy rescuing her from 'the pirate', pretending to be both Roy and herself as she monologues, eventually prompting Geese to leave.

Larum also has an interest in cooking that is revealed in a couple of her supports, though she is apparently very bad at it (with Echidna refusing to even call it by that name.). The only two people who ever ate her cooking without complaint were Elffin and Douglas, though only the latter is able to eat it without any problems, as Echidna seems to be the only person to criticize Larum's cooking in front of her, with most people never doing so out of kindness.

Description: A young dancer helping the resistance on the Western Isles.

If the player visits the house on the left or neither of them in Chapter 9, Larum automatically joins at the start of Chapter 11A.

Larum is the A-route version of Elffin who does the same thing that he does, refresh units. Even though her stats are low, since you can just rescue drop her out of the way to keep her safe, her stats do not really matter.

As a Dancer or Bard can enable many interesting strategies, like having an extra Warp use, having a unit attack with a long range tome and use a status staff in the same turn, move further, and many more things, making her one of the most useful units in the game.

Sprightly Dancer
Foster daughter of Douglas, Great General of Etruria. She aids Elffin and proves herself with her skills at gathering information. Appears in Fire Emblem: The Binding Blade.

As with most refresher units that made the jump to the mobile game, Larum is a very different unit in Heroes, especially hailing from a game where refreshers can't attack. Larum is now a Dagger unit armed with a Dragonslasher+ that grants her effective damage against Dragonstone-wielding enemies, presumably in reference to the many Dragon enemies in Binding Blade. Outside of this, the rest of her kit is purely support-oriented: having Disarm Trap neutralizes Bolt and Heavy Traps she ends her turn on top of (Aether Raids only), Spd/Res Gap bolsters the ally with the most Spd/Res on the team with an additional +5 to both stats, and of course Dance grants an ally another action.

Larum is very frail. While her Speed stat is among the highest in the game, this is balanced by her Defense being among the lowest, so anything that targets Defense is likely to KO her in one hit. Her Resistance is slightly riskier to target, as Larum has enough Resistance to take a magic hit and retaliate against Tome units that usually also have a weaker Defense stat; Larum's Attack stat may be low, but it will still be enough to KO a similarly low-Defense unit if her Speed lets her hit twice.

With Tethys sharing Larum's classing and being a much more available option to build a supportive Dagger Infantry refresher, Larum herself really has only one skillset worth considering: raw offense with Dance thrown in. The combination of Vicious Dagger / Courtly Fan and Windsweep / Watersweep works especially well with her Speed, letting her attack certain enemies without fear of reprisal and disabling effects that prevent her from doubling. She will have trouble securing kills without a high-cooldown Special like Dragon Fang, Glacies, or (ideally) Lethality, but as an Infantry unit she has access to Flashing Blade to accelerate the charge and will rarely have trouble activating it due to her Speed.

“Sorry father, now is the time.”
—Larum's death quote in The Binding Blade.

Larum - Cheerful Dancer (陽気な踊り子 Yōkina odoriko)
"Larum continued to travel around the world as a wandering dancer. Her energetic and cheerful dancing struck the hearts of many, and her style has been passed on through many generations to this day."

Larum and Roy
"Larum accompanied Roy to Pherae, where they married. Many voiced their discontent at bringing in a woman of unknown origins into the family, but Lalum's perseverance and unbending will earned her respect. She then proceeded to live happily with Roy."

Larum is illustrated in the trading card game Fire Emblem Cipher with the following cards: 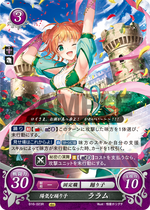 Mater Larum is a silent Roman goddess, the protector of households. She was associated with the lares, the place where the fire was lit for cooking and heating, a concept that today evolved to the fireplace and cooker. The Latin Larum literally means "seagull". Larum is also the old English word for "alarm".