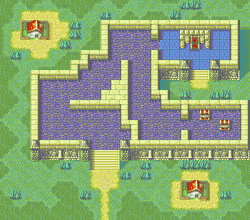 Chad
Lugh (Visit the House in the Left)

Chapter script
[view]
“Just to the north of Pherae stood Castle Araphen. The Lycia Alliance was assembling here to discuss what to do about the danger approaching from the east. Roy hurried toward Castle Araphen as well, taking with him Princess Guinivere, a key person who would make or break this war. However, when Roy had gotten within a day's march of the castle, a distraught messenger came rushing to him with grim news. Two of the Three Dragon Lords of Bern, General Brunya and General Narcian, have attacked Castle Araphen and decimated the Lycia Alliance Army...Shocked by the report, Roy hurried toward Castle Araphen to find survivors and determine the damage that was done...”
—Opening Narration

The chapter begins with Roy and his forces heading towards Araphen after receiving news of a massacre of Lycian forces there. He is also informed that Bern's Wyvern Lords had a hand in the Bern victory over the Lycian forces.

Roy and company eventually reach Castle Araphen, where he discovers it is overrun with Bern forces who have captured it. As Roy's forces approach Castle Araphen, King Zephiel of Bern takes leave of the Castle from the north-east and is shortly followed by one of Bern's Wyvern Lords, Narcian, who before leaving puts Slater in charge of the Bern forces at Castle Araphen.

A battle then ensues.

The battle takes place in the area in and around Castle Araphen, and the castle takes up most of the map. The castle walls creates relatively narrow passageways that can be used to create 'walls' or 'bottlenecks' to advance forces through.

The map also includes two villages, one to the southeast which is relatively close to the player's deployment point. This southeast house will give the player a Mend staff, which Elen can use. The second house is located near the northwest corner of the map; at the end of the first turn, a few people inside the house will have a conversation and a number of people will escape from the house off the map's north edge. If a character goes to the house, Lugh will be recruited.

Once the enemy units outside in the south are dealt with, the player can send a unit to the southeast village to visit. This village will give the person who is visiting a Mend staff to help.

The player can then slowly advance their forces up through the castle using the building's walls to create barricades, which the units with weaker defenses can stay behind.

While this is done, a few units can head up the left side of the castle towards the northwest village. A small amount of units will be stationed around the village, which can easily be dispatched by a few player-controlled units. The recruitable mage, Lugh, can be found here.

The player can then slowly advance through the Castle; by the time they reach the outside of the throne room, the forces who had recruited Lugh will likely have caught up to the main force.

The thief Chad can then head to the southeast room with the treasure chests, along with a few units who can defeat the few Knights guarding the room.

As Chad picks the chests, the main force can gang up on the boss, who can easily be defeated with the Armorslayer sword acquired in the previous battle or, better yet, with Lugh, for some much needed experience. He should be used against the enemy Knights as much as possible.