Priest
[view]
“Um... excuse me. Are you people heading to town by any chance? Our abbot is ill. He needs medicine, but Begnion soldiers are hoarding our provisions in the manor house.”
—Laura, to the Dawn Brigade

Laura is a playable character from Fire Emblem: Radiant Dawn.

As a citizen of Kisca, a town in Daein, She met Micaiah's group while attempting to retrieve medicine for her Abbot which was taken by the Begnion Occupational Army's soldiers. She got captured and imprisoned at Gribe prison, but with Sothe’s help, she and Micaiah managed to escape. She then became a member of the Dawn Brigade and traveled with them. Aran, a childhood friend of Laura’s who joined the Begnion Occupational Army, decided to cut ties with them after being persuaded by her. She is recruited in the beginning of Chapter 1-2. She begins as a priest. After Daein is revived, she remains in the army with Aran until Ashera delivers her judgment.

Laura is a very positive person, being a girl of purity and devotion to the goddess Ashera. She also is very kind and gentle and goes to great lengths to help others wherever she can. However, she can become very misled, particularly when she refers to the Dawn Brigade as "bandits".

* Only if Staff mastery rank is at D.

* Only if Light mastery rank is at D or lower.

** Only if Staff mastery rank is at B or lower.

Laura is crucial to your success during Part I. As your sole healer from Chapter 2 to the Epilogue of Part I (Micaiah's sacrifice notwithstanding), and buying healing items being quite an expensive investment, she is a godsend for a team as fragile as the Dawn Brigade, and is sure to remain useful throughout Part III.

Laura has very high Magic, Skill, and Speed growths, however, due to the low and fixed EXP gains of healers in Radiant Dawn regardless of difficulty or level, she'll grow very slowly on her own unless the player chooses to stall, which is somewhat counterproductive, as Radiant Dawn grants Bonus EXP for finishing maps quickly. With terrible base Defense and Speed then, she's very likely to get doubled and killed by a random enemy unit if she gets into a battle, and most of the time will die from one hit anyway. She can tank Magic at the start with her high base Resistance for her level, but her Resistance growth is unusually shaky for a Priest.

Her low EXP gains will result into a unit who will most likely remain at Tier 1 even in Part IV. There are a few ways to circumvent this and at least increase her survivability as well as her healing output, should you want to put in the effort with minimal resources (without stalling and/or dumping all your Bonus EXP on her).

Level Laura up to level 10, and give her a Master Seal at around Chapter 7 or 8, where she should be able to promote naturally with a bit of help from Bonus EXP. She will promote to Bishop, with still pretty subpar stats, but giving her potential access to the Paragon skill available after Chapter 6, which doubles EXP gains. During Part I, the only other unit who can truly benefit from Paragon is Micaiah (she can use it at Tier 1, and should be prioritised over Laura if she is far from reaching level 20 towards the Epilogue). While promoting puts a damper on EXP gains for battles, these stay the same for healing and offensive staves such as Sleep, with the cheapest healing staff giving her 22 EXP with Paragon equipped instead of 11. As a consequence, Laura will be able to get her promotion bonuses early, and grow fast enough to take a comfortable level lead from the rest of the Dawn Brigade in late Part I for a few chapters without taking much resources away from the rest of the team, making her able to take a bit more abuse later on and use Light magic to attack and retaliate.

That being said, Laura doesn't need good stats (outside of Magic) or Light magic to be useful to the team, she doesn't need to see any battle throughout the entire game either. All she really needs to do is to heal and build her staff rank, and while it does make the mid-game a bit easier to have a levelled up Laura with better range and healing output with Physic staves and the player not having to stress as much with her placement, she will heal reasonably well regardless of being Tier 1 or 2. If you choose to leave her at Tier 1, you'll have to constantly mind her position, in Part III & IV she cannot afford to take a single hit, even from Magic.

If she manages to reach her final class, Saint, Laura at maximum potential will essentially become a worse Micaiah, being able to use SS Staves and Light tomes. However, Saints aren't a popular class to take to the Endgame, due to underwhelming caps, Archsages being able do the healing job just fine at A Rank with the only really useful staff unavailable for them being Fortify, they can hit harder with their own tomes, there are rather limited deployment slots, and Micaiah is forced deployed.

Laura becomes a very niche choice at the end of the game, but that doesn't make her any less useful in Part I & III. She is a must use for any player in her first eleven possible deployments, and having her more bulky can help for more aggressive strategies during mid-game. As for max potential, it still takes a lot of effort for Laura to reach Tier 3 from level 1, and most players won't have the patience to level her up exclusively for such little pay off at the end anyway.

Carefree Saint - Laura
Laura returned to her home's church and became a mother to many orphans, all of whom loved her gentleness.

Laura is illustrated in the trading card game Fire Emblem Cipher with the following cards: 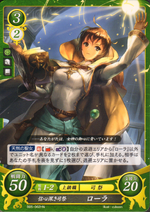 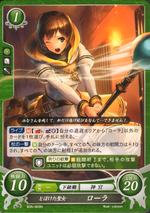 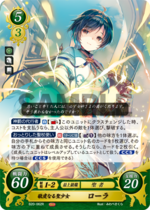 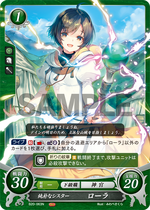 Laura's name is the female form of the name Laurus, which means 'Laurel'. In ancient Rome, leaves of laurel trees were used to create victors' garlands. The name 'Laura' found its roots in the 9th-century Spanish martyr Saint Laura, who was a nun thrown into a vat of molten lead by the Moors. The name has been used since the 13th century. A famous bearer was Laura Secord (1775-1868), a Canadian heroine during the War of 1812.