Paralogue 14: Shadow in the Sands

Laurent is a playable character from Fire Emblem Awakening. He is Miriel's son from the future, and can potentially be the brother or father of Morgan.

In the future, as with all other parents, Laurent's parents assisted in fighting off the Risen. His father died first and soon Miriel went missing during a battle. It is unknown if she truly died as her body was never found. However, like the other children, Miriel's ring was recovered and given to Laurent, which he continues to wear. His Summer Scramble pre-battle quote also reveals that his mage hat belonged to Miriel as well. Laurent returned to the past with the other children to prevent the ruinous future. However, due to anomalies in the time travel process, Laurent was transported 3 years before Lucina's arrival and thus made him older than Lucina despite being born after her. It is not known what Laurent did during the 5 years from his arrival in the past to the day he was recruited into Chrom's army, but Laurent battled with constant loneliness and fear that he would never meet his parents again.

In his Paralogue, Chrom's army arrives at an oasis with a rumored mirage village. Unfortunately, they meet a group of bandits who are planning to raid all the villages as they too are also trying to find the mirage village. If Miriel enters the nearby village, Laurent will come out and recognize her instantly. However, his mother is too pressed on finding the mirage village, so he assists Chrom and his forces in clearing out the nearby bandits. If Chrom enters the nearby village, he will come out and recognize Chrom, offering his assistance to him after he tells him he is Miriel's son.

After the battle, Laurent goes to his mother and shows him her ring, which Miriel subjectively says is not concrete proof that he is her son, as he may have pilfered the ring from another Miriel. However, she admits that she has no evidence to prove that he is not her son, so she asks that he accompany her to find out.

After the war, wanting to match his mother's intellect, Laurent set off on a long journey. He would later write a legendary tale of his journey in an epic novel.

In Laurent's support with his mother, the two spend much time pondering the mechanics of alcohol flammability and flame colors. In their final support, Laurent finds usage for the colored flames by making fireworks, which his mother offers to assist him. In his support with his father, his father wonders what he and his son have in common since Laurent plainly takes more from his mother. Laurent tries his best to isolate himself from his father, believing that he is no longer a child, but a full grown adult. However Laurent's father reminds him that even though he is an adult, he is still his son and that he should not isolate himself nor put so much stress upon himself. Laurent finally opens up to his father and rids himself of all of his fears and loneliness that came from his time by himself.

Laurent can be a bit cold and callous, much like his mother, as he inherited his mother's incredible academic prowess. While Miriel's scientific inquiries are focused in theory and discovering natural laws, Laurent tends to find practical applications for the subjects he studies, such as making the world's first fireworks in a support conversation with Miriel.

In addition, he oversees the Shepherd's treasury, having a strict stance on the budget and purchasing items that are needed. Laurent often checks on the well-being of others, and will help them in any way possible if he needs to step in. However, sometimes he wonders if his advice actually helps, as he occasionally doubts that it may be just an "inflated" ego and that the people he talks to have better ability than him.

Due to arriving earlier than the other children, he believes that he is no longer a child and must act like a responsible adult.

Compared to the other Shepherds - specifically, the Shepherds who regularly wear glasses - Laurent's glasses give off the "worst lens glare".

* - Laurent will inherit the last active skill from both of his parents, excluding those exclusive to DLC.

Laurent cannot re-class into the following class sets, but he can inherit a skill from them:

Laurent - The Elucidator
Longing to meet his mother's intellectual standards, Laurent went on an expedition around the world. His curious nature led to many adventures, which he later put to paper in a rousing novel.

Laurent and Robin
Many wrote of Robin's legendary exploits, but accounts of her origins and character varied. Scholars, poets, and bards agreed on one thing alone—she loved her husband, Laurent, above all else.

Laurent and Lucina
Longing to meet his mother's intellectual standards, Laurent took his wife on an expedition around the world. Lucina reunited with Tiki and Naga and thanked them for helping to usher in peace.

Laurent and Kjelle
Longing to meet his mother's intellectual standards, Laurent took his wife on an expedition around the world. As Kjelle, too, valued self-discovery, the pair were said to be nearly inseparable.

Laurent and Cynthia
Longing to meet his mother's intellectual standards, Laurent took his wife on an expedition around the world. The hidden wonders they uncovered awed Cynthia, who had known only a world of ruin.

Laurent and Severa
Longing to meet his mother's intellectual standards, Laurent took his wife on an expedition around the world. Severa set out in search of treasure but instead discovered something much, much greater.

Laurent and Morgan
Longing to meet his mother's intellectual standards, Laurent took his wife on an expedition around the world. While Morgan's memory never returned, she didn't seem to miss it much.

Laurent and Noire
Longing to meet his mother's intellectual standards, Laurent took Noire on an expedition around the world. Noire seemed startled at first by many of their discoveries but knew she was in good hands.

Laurent and Nah
Longing to meet his mother's intellectual standards, Laurent took Nah on an expedition around the world. Their curious nature led to many adventures, which they later put to paper in a rousing novel.

Laurent is illustrated in the trading card game Fire Emblem Cipher with the following cards: 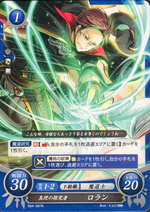 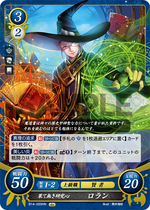 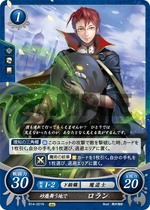 Laurent is a French variation of the name "Laurence", which is a Latin name meaning "laurel crowned" or "victory". The latter meaning is a possible reference to his deductive nature. He may also be named after Auguste Laurent, a french chemist credited with discovering hydrogen chlorine gas.