Laylea is a character from Fire Emblem: Genealogy of the Holy War. She is the substitute character of Lene if Silvia was not paired up.

She is working as a dancer in Dahna, where she meets Ares. When Ares departs to fight for Javarro, Laylea and Ares have a discussion, since she disapproves Ares wanting to go to war and find his grudge against Sigurd's descendant, Seliph, foolish. She explains her reasoning that his father and Sigurd were knights, and similar to her profession as dancer, they were forced to take actions against their will. When Ares insist to go to fight, she storms out saying that he should never talk with her again.

While Ares is far away, Laylea refuses to become Bramsel's personal dancer, and she is thrown into the dungeon of Dahna Castle. It is believed that she may have been further abused by him, but it's not fully clear.

The castle in which she is held as a prisoner is eventually seized by the rebels, and she is freed from her cage by Seliph or another member of his army. She later meets Ares again when he is subjected under the army of Seliph, and he asks if she is ok, she answers negatively but is relieved to see him alive.

Later, Laylea introduces herself to Seliph and is surprised when he flushes and acts flustered on her presence. She discovers that he never saw a dancer before, and she finds his awkwardness and naivety lovely.

Laylea is able to initiate a unique conversation of her own, in chapter 7: If she visits one specific village, she will meet Anna, who upon noting that Laylea is eager to fight in the army to protect someone she loves, will gift Laylea with Barrier Blade so she can properly battle against imperial soldiers.

She is the sister of Charlot, despite not having any knowledge of it. In Chapter 9, Laylea meets Charlot for the first time in her life, although neither of them recognize each other. Charlot reveals that he never saw a dancer prior and Laylea bonds with him by saying that she could show her dancing to him.

She will be the queen of Isaach if she is paired with Shannan. If Laylea marries Leif, she will turn Queen of Thracia. She will go to Yngvi with it's heir Febail if they have an end together. And finally, should she marry Oifey, she will became the next high duchess of Chalphy.

If she is not paired at all, she will return to Agustria and keep with her job at dancing. Seliph tells Laylea that she will eventually find someone amazing that could make her happy, but she answers that she would be happy even alone as she would be making what she loves the most: dancing.

Laylea is honest and sometimes cynical, with a realistic world view, being aware that certain unpleasant things need to be done for survival. Her profession is also shown the be the target of prejudice, as the characters seem to objectify or overall look down to dancers. She has a somewhat fiery personality, and is unwilling to back down or kowtow to men.

She caring towards her friends, abhorring the idea of abandonment. She is slightly more sultry than Lene is, as can be seen from her adult-like design, complete with a curvy body, large breasts, and a mature face. She's also shown to be a teaser, as seen in her reactions when Seliph was flustered duo to never seeing a dancer.

Overall, Laylea shares similar character traits with Lene, as the major part of their dialogues are shared, and like most children of second generation, she doesn't have a developed personality.

Laylea may be easier to use than Lene is, due to the fact that she possesses Charm, a skill that Lene will never learn. As Dancers are generally not made for combat, stat growths are thus irrelevant in that regard. She is also the only way to obtain the Barrier Blade, a very useful item (if not for her, then for other units in your army, like Altena). The only advantages that Lene has over Laylea is that she is able to inherit the Leg Ring and Knight Ring from her mother, alongside superior defensive abilities and the Miracle skill. Laylea, on the other hand, will have to buy the two rings in order to really be useful as a Dancer.

It is ultimately up to the player's discretion as to whom to select as their dancer unit in Generation 2, whether they prize bonus items and Charm or overall durability more.

In Chapter 7, Laylea can talk to Seliph, but nothing will happen.

In Chapter 7, if Laylea visits a certain Village south of Leonster, she will initiate a conversation with Anna, in which Laylea will receive the Barrier Blade.

In Chapter 9, Laylea can talk to Charlot, resulting in him gaining one point of luck.

Laylea is illustrated in the trading card game with the following cards: 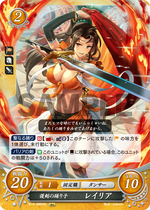 Laylea is a corruption of Laila, name of Hebrew, Arabic and Nordic origin that means "night" and "holy" respectively.